Seniors get diplomas on racetracks, chairlifts amid virus 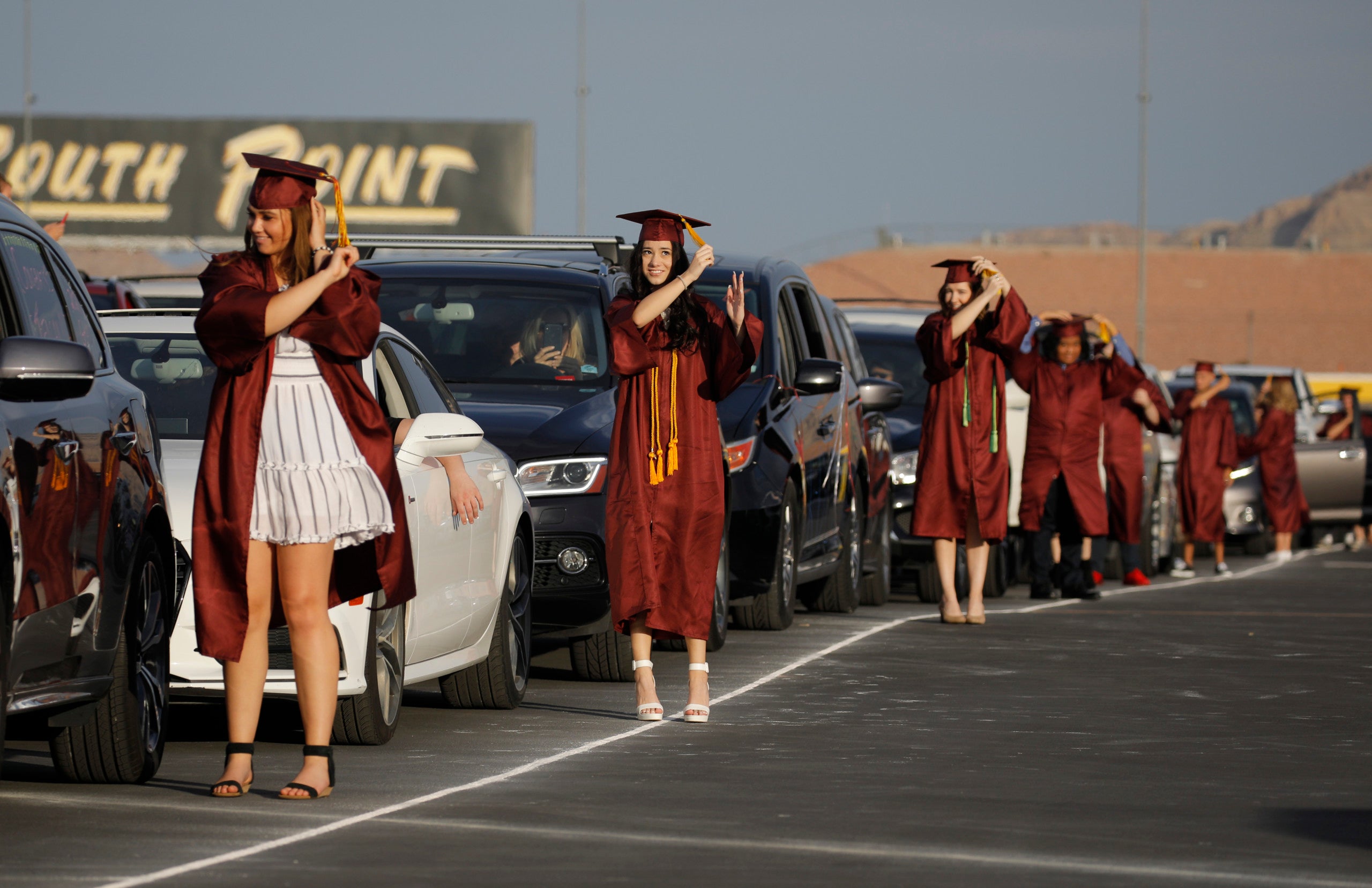 Graduates flip their tassels near their cars during a drive-thru graduation for Faith Lutheran High School at the Las Vegas Motor Speedway, Friday, May 22, 2020, in Las Vegas. The school held a special drive-thru graduation amid the coronavirus pandemic. (AP Photo/John Locher)
by: MICHELLE L. PRICE and LISA RATHKE Associated Press
Posted: May 24, 2020 / 12:25 PM EST / Updated: May 24, 2020 / 12:25 PM EST

LAS VEGAS (AP) — Immediately after giving his valedictorian speech, high school senior Philip Root, still clad in his cap and gown, climbed into a borrowed race car and drove up to the finish line at the Las Vegas Motor Speedway.

With the yellow tassel of his graduation cap flapping in the wind, Root leaned out the window and posed for a photo as he accepted his diploma — and then took off on a celebratory lap around the track.

Root gave his speech over the radio from the broadcasting booth, which the graduating class of Faith Lutheran High School listened to as they sat with family in individual cars decked out with signs, banners and balloons. Then, in front of the empty grandstands of the racetrack that’s been idled for months due to the coronavirus, Root led his classmates as they pulled up one-by-one to the waving checkered flag to get their certificate from administrators wearing face masks. To mark the milestone, the students and their families whooped and cheered and then hit the gas pedal.

The ceremony was part of a growing push by high schools across the country to find a way to hold in-person graduations and offer up some added pomp amid the coronavirus pandemic. The graduation ceremony is seen by many as salvaging a school year in which many haven’t seen classmates for months and missed out on traditional senior activities such as proms and end-of-school parties.

There are still many schools that have settled on virtual graduations — something that’s drawn online petitions from students and parents demanding traditional commencements be held later in the year if social distancing rules are eased. Some of those virtual events have attracted famous speakers, including President Barack Obama who gave a commencement address earlier this month. The television special featured other celebrities, including NBA star LeBron James, actress Yara Shahidi and actor and singer Ben Platt.

But for schools pressing ahead with in-person graduations, that has meant coming up with creative ways to holding events while adhering to limitations on crowd sizes and social distancing guidelines. They are spacing students apart in big auditoriums with limited guests, or in one town in New Hampshire, sending seniors off with a mountaintop graduation, accessible by chairlift.

“We are using our local community resources and assets to make the best possible case out of what is a horrible current situation,” said Kevin Carpenter, principal of Kennett High School in North Conway, New Hampshire, where Cranmore Mountain ski resort is offering its services at no cost to the school for the June 13 ceremony. “It was just so important to us that we be able to try to find the best possible way we could to honor our class of 2020,” he said by email.

The 174 seniors will be allowed to each have four guests join them for a 10-minute ride on the chairlift to the mountain summit, where they will get their diploma and be photographed.

In western Maine, the rural Oxford Hills High School is making use of a twin-screen, drive-in movie theater in Bridgton for its graduation on June 21.

The family of each graduating senior is limited to one vehicle and pre-recorded segments featuring student addresses, student performances and the guest speaker will be displayed on the big screen. Also projected will be each of the students who’ll leave their vehicle to receive their diploma in the “snack shack.”

Afterward, vehicles will caravan to Oxford Plains Speedway for a private fireworks display.

“This is a class that was born in the shadow of 9/11 and is graduating in the shadow of a pandemic. These are most resilient, malleable, positive students,” said Richard Colpitts, superintendent of the Oxford Hills School District. “This is a time when many people get down on life, but this class is very positive and optimistic,” he added.

Other school officials are focusing not so much on the road, but the vehicle, to give students a special sendoff.

At Bay High School in Bay St. Louis, Mississippi, school officials set up a drive-in commencement, Friday night, with each of its 127 graduating seniors and their families being picked up in a loaned Jeep. The Jeeps, popular in the Gulf Coast community, ferried students to a stand to pick up their diplomas.

Some districts have chosen to turn their graduation into marathon affairs. In a Dallas suburb, a 12-hour in-person ceremony took place Friday for the 1,400 graduates of Allen High School. With social distancing in mind, they walked across one of four stages in the stadium at various times and got their diplomas from family members, with no crowds in the stands.

In Las Vegas, the school’s CEO Dr. Steve Buuck said a few parents pushed back against the idea of a racetrack graduation, urging the school to postpone and hold a traditional ceremony. Buuck said he understands that, but the school wanted to find a cool way to honor their student’s achievements in a time when large, multi-generational gatherings like high school graduations are considered too risky.

“I think — like all Americans — we all just want some normalcy,” he said. “Lord willing, we’ll be back in a normal venue next year,” he said.

Faith Lutheran senior Sanniyah Haye said she was disappointed when she learned the original graduation plans would be canceled and travel restrictions kept family from attending. But after two months without seeing her classmates, she was happy to reunite with them for a once-in-a-lifetime experience, even if it involved posing for socially-distant photos, “standing 6 feet away kind of reaching for each other in our caps and gowns and smiling,” she said with a laugh.

“I can’t be more proud of us for finally getting to the finish line,” she said — no pun intended.

Pardon for Michael Flynn under discussion at the White House