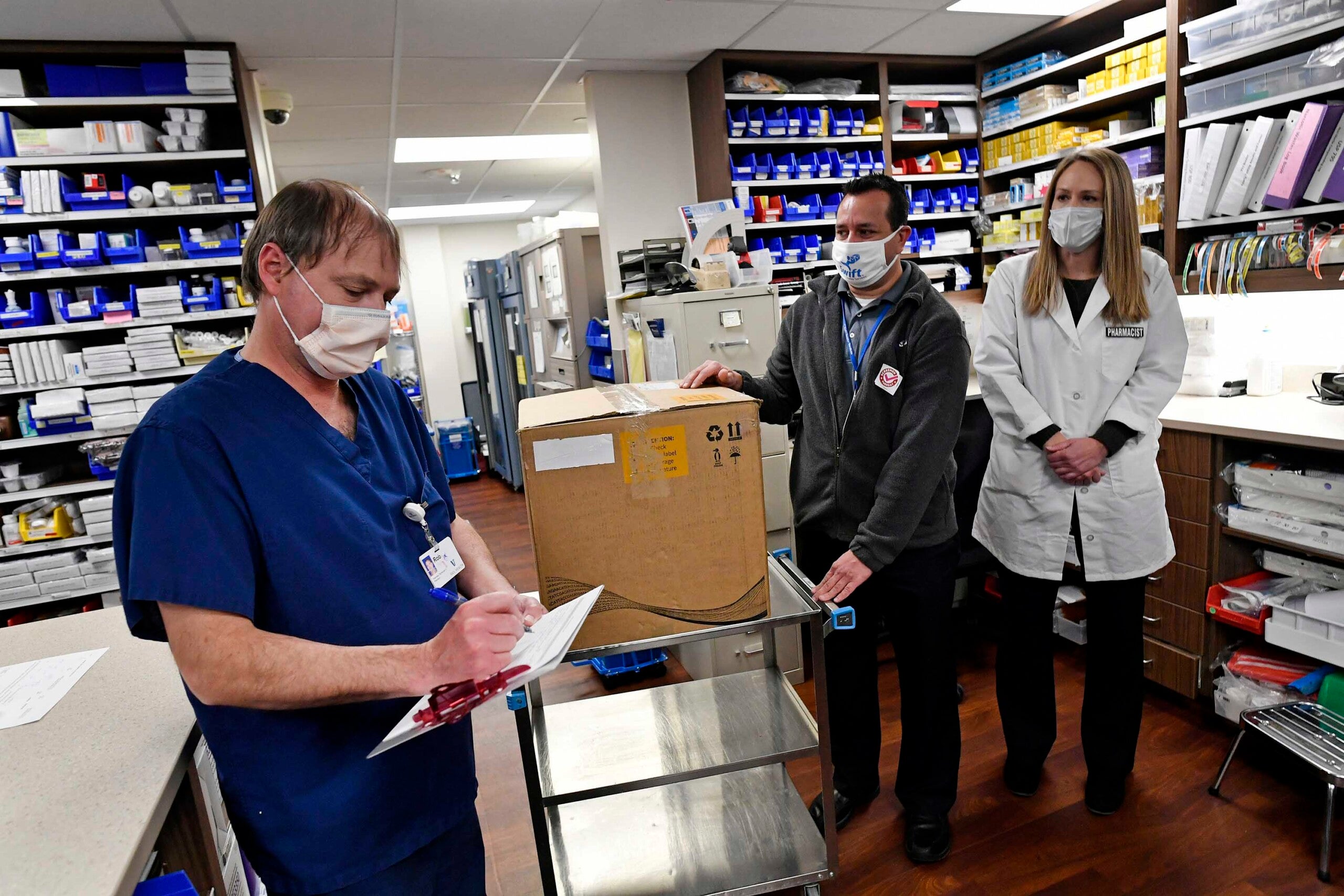 VAIL, COLORADO - NOVEMBER 8: Vail Health Hospital pharmacy technician Rob Brown, left, signs the necessary paperwork to take possession of mock Covid-19 vaccines from courier driver Leo Gomez, center, as pharmacist Jessica Peterson watches over the process in the pharmacy on December 8, 2020 in Vail, Colorado. With the state expecting its first shipment of a COVID-19 vaccine in a matter of days, the state health department ran an exercise to see how ready it is to take on such a mass vaccination campaign. The Pfizer vaccine, which is the first shot expected to gain federal approval, will be difficult for the state to distribute as it needs to be stored at sub-zero temperatures and requires two shots. The Colorado Division of Homeland Security and Emergency Management held a dry run or drill of receiving the vaccines in a thermal shipping container at Denver International Airport, using a courier car to take the vaccines to Vail Health Hospital and then the path the vaccines will follow once at the hospital from the pharmacy to a patient receiving the vaccine. (Photo by Helen H. Richardson/MediaNews Group/The Denver Post via Getty Images)
by: Annie Grayer, Ellie Kaufman and Sara Murray, CNN
Posted: Dec 9, 2020 / 11:30 AM EST / Updated: Dec 9, 2020 / 05:18 PM EST

(CNN) — With the first shipments of a coronavirus vaccine poised to go out as early as this week, the plan to get the shots from the manufacturers into hospitals, assisted living homes, pharmacies and — ultimately — Americans’ arms, is still riddled with unknowns.

States are already running into challenges when it comes to distributing the vaccine to their first priority group and that is when there are only limited distribution points and a very narrow focus of who is meant to receive the vaccine. The issues around distribution and who gets the vaccine grow even more complicated when states eventually move past their highest priority populations and start opening up more vaccination sites to vaccinate larger groups of the population.

At this point, the number of doses each state is getting in its first shipment is fluid and, in many cases, the amount is less than what states were initially told to expect, leading states to change distribution plans even as the first shipments could come as soon as the end of this week.

But the thorniest decisions still lie ahead for state officials: deciding which essential workers qualify to be vaccinated after the initial group is complete, in the face of a limited vaccine supply and the unknowns of what shipments in January through the spring of 2021 will look like.

Although there is a general consensus among states that health care workers and long-term care facilities should receive the vaccine first, states have different approaches to who specifically within those two groups should get the vaccine first given how limited the initial supply is.

Associate Director for Global Health Policy at the Kaiser Family Foundation Josh Michaud, who has analyzed all of the state vaccination distribution plans available, said it is hard to compare how each state has chosen to go about vaccinating its population.

“Things change on sort of a daily basis, so your ability to be agile and pivot is important,” Dr. Amy Young, the chief clinical officer at UT Health Austin, told CNN.

“We think probably in the first round we’ll be able to vaccinate our health care workers, but we don’t really know that,” Young said. “There are more unknowns than there are knowns.”

States are starting to get an idea of how many doses they’ll get in December, but it’s a blank slate in January. It’s easier to plan who qualifies as an essential worker in the first group to get vaccinated if officials know there are large numbers of vaccines coming in a few weeks, but that’s a harder call to make when doses are limited and even more difficult when you just don’t know how many doses you will have once you get to that tier, a state official said.

“It becomes just exponentially more complex as you start to expand the scope beyond a very defined early high priority population. Just thinking about how they will be prioritizing a group like essential workers, your head starts to spin about all the various ways that this could meet difficulties,” Michaud told CNN.

For example, a teacher or a police officer in one state, who both fall under the essential worker group, could receive the vaccine at a different time than their counterparts in neighboring states based on how their state prioritizes each subgroup.

Poor planning for how to handle the vaccination of larger populations also creates room for serious inequalities to emerge. If robust channels aren’t already built to reach more rural or harder to reach populations, then as the vaccine becomes more widely available, it will continue to go to those who are easiest to reach, not to everyone who is meant to get it.

“It is going to get more and more complicated,” Michaud said. “There’s so many barriers, especially when talking about reaching rural areas, disadvantaged populations.”

Where does the vaccine go after it’s authorized?

In most cases, the first shipments of the vaccine will be transported from Pfizer’s facility in Kalamazoo, Michigan, to hospital systems and pharmacies that partnered with the federal government, which will be directly responsible for giving the vaccine to their health care workers and residents of long-term care facilities respectively.

But, as Dr. Anthony Fauci, director of the National Institute of Allergy and Infectious Diseases, said during CNN’s Coronavirus town hall last week, “It’s up to the state and local authorities in their individual way to make the decisions about the distribution, as well as the logistics of it.”

So, in other states, such as Illinois, the delivery will go first to the state’s strategic national stockpile, and the initial doses of the vaccine will be sent to hospitals from there.

The distribution from vaccine production company to individual hospitals and pharmacies in each state as directed by the federal government, is different for almost every state. State health department officials are coordinating with federal officials in Operation Warp Speed. However, there is no clear roadmap that explains how this process is working simultaneously in all 50 states.

Instead, states have developed individualized vaccine distribution plans that vary slightly for each individual state’s demographic and geographic needs.

“I think of how we’re doing vaccine allocation like this nesting doll,” Alaska Chief Medical Officer Anne Zink said last week during a press briefing, when describing how she conceptualizes who is in charge of what in the distribution process. “There’s all sorts of different layers.”

Officials at the US Centers for Disease Control and Prevention have been in close contact with state leaders about how their distribution plans will work and challenges that could crop up state to state.

“Well-trained experts in this field of distribution have really set up an elaborate coordination and collaboration effort with the states,” Operation Warp Speed’s Perna said last week. “They run daily, weekly meetings. They work through detailed execution of plans.”

Deacon Maddox, Operation Warp Speed chief of plans, operations and analysis, told reporters on Monday that after the initial shipment of vaccine doses goes out to states, the federal government and states receiving the vaccine doses will get into a rhythm of shipping doses out regularly.

“The manufacturers have up until Thursday night to let us know how much they’re going to deliver. Friday morning we’ll meet, we’ll consider all the information. We’ll make a decision, we’ll publish the information, we’ll allocate, we’ll adjust ordering caps, and then states can order the next day, with delivery starting 24 to 48 hours later,” Maddox said.

The hope is for a constant flow of vaccine as the manufacturers push it out, Maddox said.