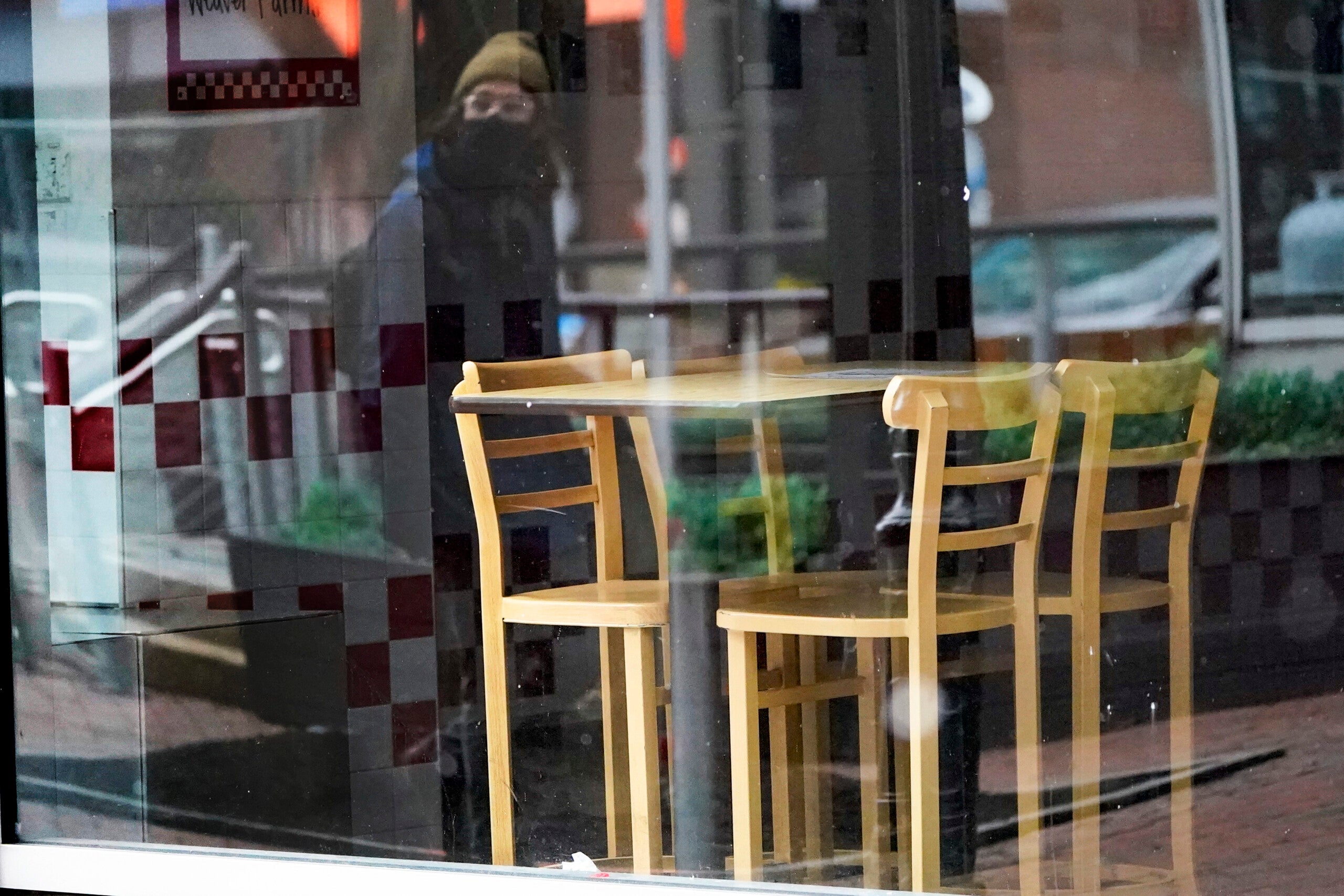 FILE - In this Jan. 17, 2021, file photo, a passerby wearing a protective mask is reflected in the window of an empty restaurant near Market Square in downtown Pittsburgh. Irritated by the sweeping use of executive orders during the COVID-19 crisis, state lawmakers around the U.S. are moving to curb the authority of governors and top health officials to impose emergency restrictions such as mask rules and business shutdowns. (AP Photo/Keith Srakocic, File)
by: By DAVID A. LIEB Associated Press
Posted: Jan 28, 2021 / 02:22 PM EST / Updated: Jan 28, 2021 / 03:52 PM EST

Irritated by the sweeping use of executive orders during the COVID-19 crisis, state lawmakers around the U.S. are moving to curb the authority of governors and top health officials to impose emergency restrictions such as mask rules and business shutdowns.

The push is underway in such states as Arizona, Michigan, Ohio, Maryland, Kentucky, Indiana and Pennsylvania, where legislators are seeking a constitutional amendment to strip the governor of many of his emergency powers.

Pennsylvania Republican Sen. Wayne Langerholc said the amendment would “make it unequivocally clear that our General Assembly is a co-equal branch … that we are not a monarchy and that our voices matter.”

Democratic Gov. Tom Wolf and some of his counterparts around the country have argued that they need authority to act quickly and decisively against the fast-changing threat.

The coronavirus has killed an estimated 430,000 Americans and is going through its most lethal phase yet, despite the rollout of vaccines, with new and more contagious variants from abroad turning up in the U.S.

State legislatures generally took on lesser roles after the pandemic hit, with many suspending work or adjourning. It has been governors or their top health officials who have set many of the policies — imposing mask mandates, limiting public gatherings and shutting down dine-in restaurants, gyms, hair salons and other businesses.

Lawmakers in more than half the states have filed bills this year to limit gubernatorial powers during the pandemic and other emergencies, according to the National Conference of State Legislatures. Most legislatures began their sessions this month.

Kentucky’s Republican-led Legislature could consider as soon as next week whether to override Democratic Gov. Andy Beshear’s vetoes of several bills that would rein in his emergency powers.

Wisconsin Republicans have argued that Evers exceeded his authority by issuing multiple emergency declarations during the pandemic, which enabled him to extend the mask mandate beyond the 60 days allowed under the law without getting the Legislature’s approval.

Evers contends that the changing nature of the pandemic warranted new emergency declarations.

The amendment Pennsylvania Republicans are seeking to place on the May ballot also would put a cap on the governor’s disaster declarations — 21 days, unless lawmakers vote to extend them. The Legislature also could halt them at any time with a two-thirds vote.

Wolf has said that prematurely ending his disaster declaration would itself be “disastrous” for the state and that requiring repeated legislative approval “could slow down or halt emergency response when aid is most needed.”

In Michigan, House Republicans have threatened to withhold billions of dollars for schools unless Democratic Gov. Gretchen Whitmer cedes her administration’s power to prohibit in-person instruction and sports to local health departments. Whitmer was the target of an alleged kidnapping plot last fall by anti-government extremists upset over her coronavirus restrictions.

Though legislative resistance to executive coronavirus orders has fallen largely along partisan lines in some states, lawmakers elsewhere are pushing back against governors of their own parties.

Republicans in the Arizona Senate want to end the broad emergency powers that GOP Gov. Doug Ducey has used to limit large gatherings and business capacities.

Ohio Sen. Rob McColley introduced a bill this week that could rescind emergency health orders issued by Gov. Mike DeWine, a fellow Republican. It would create a committee to retroactively review them. DeWine vetoed a similar bill last year.

McColley said the Legislature needs to take action “when the relatively unfettered power of the executive branch during a time of emergency has lasted as long as it has.”

In Indiana, Republican Gov. Eric Holcomb’s executive orders have also stirred opposition from his own party. GOP-sponsored legislation would require lawmakers to be called into session to extend a governor’s emergency order beyond 60 days.

South Carolina Gov. Henry McMaster is supporting legislation that would give lawmakers greater opportunity to pass judgment on his emergency declarations.

Under current law, McMaster can issue a declaration for just 15 days before the General Assembly has to weigh in. The Republican governor has skirted that by issuing 22 different declarations, with incremental changes, every two weeks or so.

McMaster has said his goal wasn’t to avoid legislative oversight; he said he couldn’t wait for lawmakers to meet when they were trying to stay apart during the pandemic.

Democrats who control the Maryland General Assembly are pressing for more transparency from Republican Gov. Larry Hogan’s administration. One idea would require him to go through a state board or alert a legislative panel before making emergency coronavirus purchases.

A separate GOP-sponsored bill seeks to limit Hogan’s power by capping the number of times he could extend a state of emergency without legislative input. Hogan has denounced it as “about probably the dumbest thing I’ve ever heard in my life.”

Lawmakers are also seeking to rein in the emergency powers of local officials, especially in states such as Missouri, where the Republican governor has deferred most decisions on shutdowns and masks to cities and counties.

St. Louis County, the state’s biggest jurisdiction, has imposed a variety of restrictions, including periodic prohibitions and capacity limits on indoor dining at restaurants.

Jeff Fitter, the owner of Super Smokers BBQ, said his profits were cut in half last year. He is supporting a bill that would limit local emergency health orders to 14 days unless authorized for longer by the Legislature. It also would give tax breaks to businesses affected by occupancy limits imposed by cities and counties.

“One person, one pen, shouldn’t be the difference between my business surviving or its demise,” Fitter said. “That should be something that is ran through a legislative body.”

With information from the Indiana Department of Health through Feb. 25, 2021, this timeline reflects updated tallies of deaths and positive tests prior to that date.