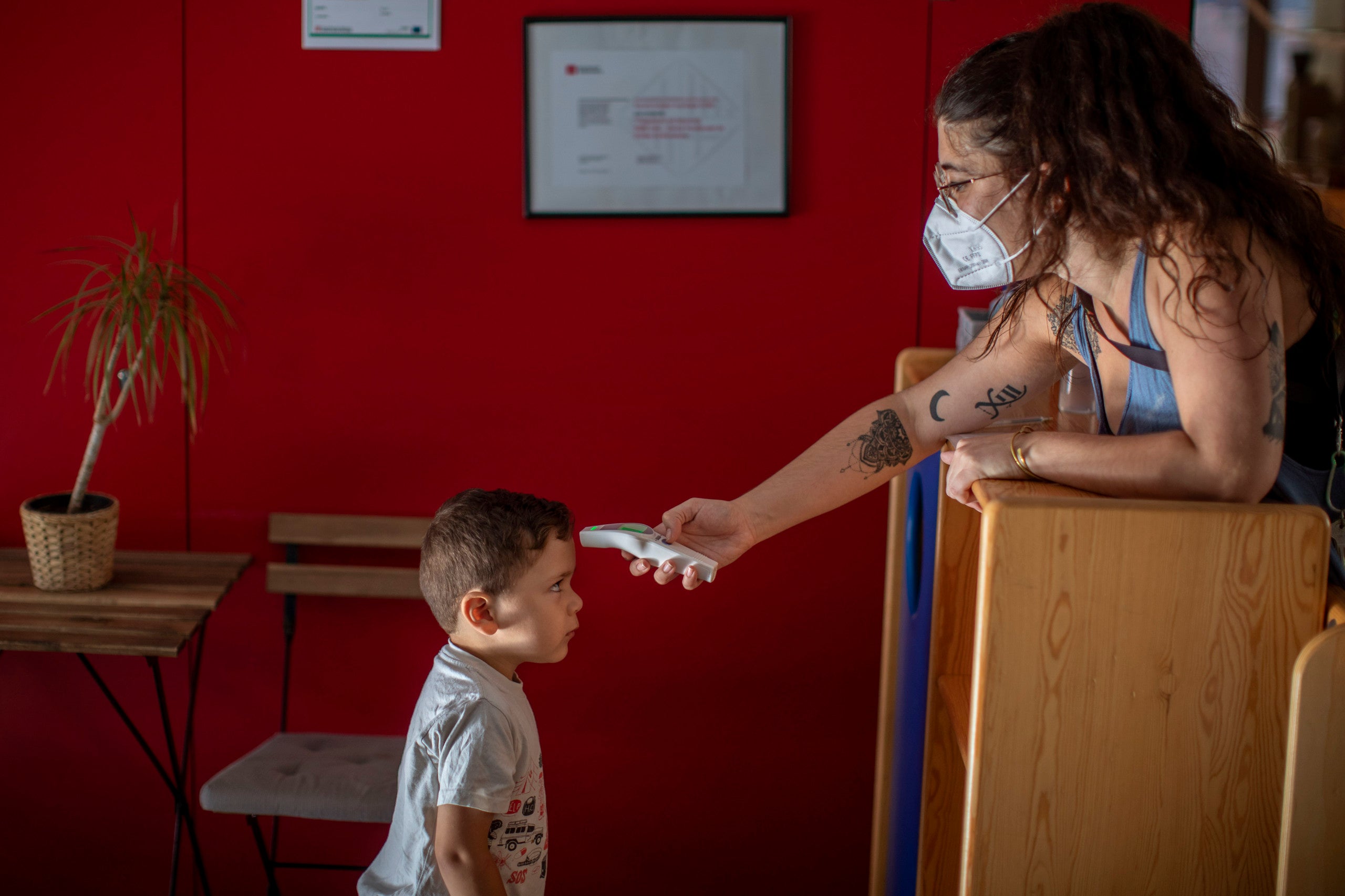 Hugo, 3, has his temperature taken by a teacher as he arrives at Cobi kindergarten in Barcelona, Spain, Friday, June 26, 2020. Spain's cabinet will extend the furlough schemes adopted during the coronavirus lockdown that brought the economy to a standstill until the end of September. (AP Photo/Emilio Morenatti)
by: By MICHELLE R. SMITH and FRANCES D'EMILIO Associated Press
Posted: Jun 26, 2020 / 12:45 PM EST / Updated: Jun 26, 2020 / 12:45 PM EST

Texas and Florida clamped down on bars again Friday in the biggest retreat yet amid a surge across the South and West that sent the number of confirmed new coronavirus infections per day in the U.S. to an all-time high of 40,000.

Texas Gov. Greg Abbott ordered all bars closed, while Florida banned alcohol consumption at all such establishments. Together the two states joined the small but growing list of those that are either backtracking or putting any further reopenings of their economies on hold because of comeback by the virus.

Abbott had pursued up to now one of the most aggressive reopening schedules of any state and had not only resisted calls to order the wearing of masks but had also refused until last week to let local governments take such measures.

“It is clear that the rise in cases is largely driven by certain types of activities, including Texans congregating in bars,” he said. “The actions in this executive order are essential to our mission to swiftly contain this virus and protect public health.”

The Florida agency that governs bars acted after the daily number of confirmed cases neared 9,000, a record that was almost double the previous mark set just two days earlier.

Texas, meanwhile, reported more than 17,000 confirmed new cases in the past three days, with a record high of nearly 6,000 on Thursday. The day’s tally of over 4,700 hospitalizations was also a record.

A number of the hardest-hit states, including Texas, Florida, Arizona and Arkansas, have Republican governors who have resisted mask-wearing requirements and echoed President Donald Trump’s desire to quickly reopen the economy.

Amid the surge, the White House coronavirus task force, led by Vice President Pence, was scheduled to hold its first briefing in nearly two months on Friday afternoon. signaling the adminstration’s recognition that it cannot ignore the alarming increases.

Meanwhile, the number of confirmed new infections in the U.S. per day soared past the previous high of 36,400, set on April 24, during one of the deadliest stretches in the crisis so far, according to the count kept by Johns Hopkins University. The average number of new cases per day has risen about 60 percent over the past two weeks, according to an Associated Press analysis.

While the increase is believed to reflect, in part, greatly expanded testing, experts say there is ample evidence the virus is making a comeback, including rising deaths and hospitalizations in parts of the country, especially in the South and West.

Deaths from the coronavirus in the U.S. are down to around 600 per day, compared with about 2,200 in mid-April. Despite the rise in cases, some experts have expressed doubt that deaths will return to that level, because of advances in treatment and prevention and also because a large share of the new infections are in younger adults, who are more likely than older ones to survive.

The virus is blamed for 124,000 deaths in the U.S. and 2.4 million confirmed infections nationwide, by Johns Hopkins’ count. But U.S. health officials said the true number of Americans infected is about 20 million, or almost 10 times higher. Worldwide, the virus has claimed close to a half-million lives, according to Johns Hopkins.

In addition to closing bars again, Abbott scaled back restaurant capacity and shut down rafting operations and said any outdoor gatherings of more than 100 people will need approval from the local government. The move came as the number of patients at Texas hospitals statewide more than doubled in two weeks.

On Thursday, Arizona put on hold any further efforts to reopen the economy, with Republican Gov. Doug Ducey saying the numbers “continue to go in the wrong direction.” Arizona reported over 3,000 additional infections Thursday, the fourth day in a week with an increase over that mark.

Elsewhere around the world, China moved closer to containing a fresh outbreak in Beijing. Another record daily increase in India pushed the caseload in the world’s second most populous nation toward half a million. And other countries with big populations like Indonesia, Pakistan and Mexico grappled with large numbers of infections and strained health care systems.

South Africa, which accounts for about half of the infections on the African continent with over 118,000, reported a record of nearly 6,600 new cases after loosening what had been one of the world’s strictest lockdowns earlier this month.

Italy, one of the hardest-hit European nations, battled to control an outbreak among Bulgarian seasonal crop pickers near Naples.

The governor of the southern Campania region insisted that the workers who live in an apartment complex with dozens of COVID-19 cases stay inside for just over two weeks, not even emerging for food — authorities will deliver groceries to them.