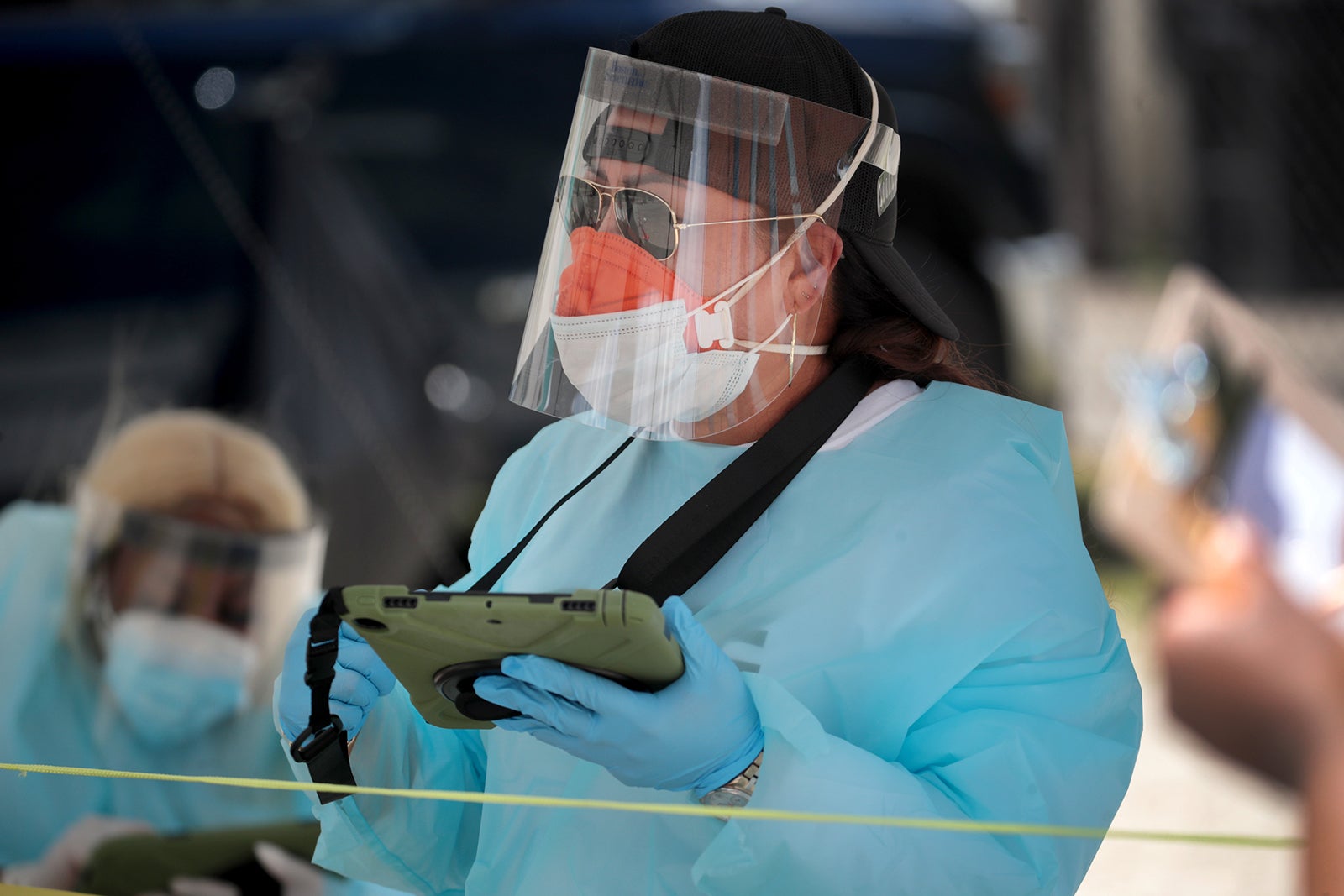 CHICAGO, ILLINOIS - JUNE 23: Workers check in residents at a mobile COVID-19 testing site set up on a vacant lot in the Austin neighborhood on June 23, 2020 in Chicago, Illinois. The site is one of four mobile testing sites, two community-based sites and two first-responder-focused sites being implemented by the city. (Photo by Scott Olson/Getty Images via CNN)
by: Jay Croft and Christina Maxouris, CNN
Posted: Jun 24, 2020 / 10:20 AM EST / Updated: Jun 24, 2020 / 10:20 AM EST

(CNN) — Texas’ governor is urging people to stay home amid a surge in coronavirus cases, with some health officials calling for a stricter stay-at-home order.

“Because the spread is so rampant right now, there’s never a reason for you to have to leave your home,” Gov. Greg Abbott told CNN affiliate KBTX. “Unless you do need to go out, the safest place for you is at your home.”

New cases and hospitalizations are rising at their fastest rate yet — something Abbott called “unacceptable” — with Texas reporting more than 5,000 cases in a single day, breaking its previous record, health authorities said.

The surge comes as alarming coronavirus trends have emerged across several US states.

Further state actions in Texas could be announced if the virus continues to spread at this rate, even as officials encourage mask wearing and social distancing in places like bars that are often overcrowded, Abbott said.

“I am glad that he did reverse court,” Eckhardt said Wednesday. “I am not confident that we will be able to reduce this trajectory.”

California recorded a striking 5,019 new cases on Monday, topping the state’s daily case record for the fourth time over the past week. In Florida, officials announced 3,289 confirmations in a day. And Arizona saw 3,591 new cases in a day.

In too many places across the country, the pandemic is quickly “spiraling out of control,” one expert said.

More than 2,347,000 people have been infected across the US with the virus since the beginning of the pandemic and at least 121,225have died, according to Johns Hopkins. The country accounts fora quarter of both the world’s total infections and total global deaths.

“We stopped the treatment too early,” CNN’s chief medical correspondent Dr. Sanjay Gupta said Wednesday. The result could be “exponential growth” of cases.

“We were able to control and contain the virus because of these shelter-in-place orders. Americans sacrificed so much for that to happen, people lost their jobs, kids went out of school and that was to buy us time,” said Dr. Leana Wen, who previously served as Baltimore City Health Commissioner.

But many places remained unprepared and reopened far too soon and far too quickly — leading to the latest surges, experts have said.

It’s a stark contrast with other parts of the world, including countries in Europe, which lowered their case counts with the help of longer lockdowns and have now begunto slowly reopen.

Officials in Harris County should “intervene now” and go back to an “aggressive” lockdown due to the steep increase in new Covid-19 cases and hospitalizations, said Dr. Peter Hotez, dean of the School of Tropical Medicine at Baylor College of Medicine in Houston.

“We are now projecting that our intensive care units will fill up over the next two weeks. And the reason that’s significant is because we know as ICUs start to fill up, mortality goes up,” Hotez told CNN on Wednesday.

“It gets harder and harder to manage all of those patients, even if you have — even if you’re fully staffed,” he said. “So, this is when you see mortality rates really start to accelerate.”

Hotez would like to see a lockdown like the one implemented at the end of March, he said. “Because things are so dire, we have to intervene now and we have to be very aggressive at implementing stay-at-home and other social distancing measures.”

“This time, we have to go back to what’s called ‘containment mode,’ meaning less than one new case per million residents per day,” Hotez said.

In Arizona, hospital systems need to put emergency plans in place due to the increase in new Covid-19 cases, said Will Humble, executive director of the Arizona Public Health Association, on Wednesday.

He predicted the state’s hospitals will go into surge capacity mode by the Fourth of July.

“What I’d be focusing right now on is sounding the alarm to our hospital systems to get ready,” Humble said. “Because no matter what you do at this point, given where we are at the increase in cases, the exponential growth, taking into consideration the incubation period for this virus, we’re going to go into surge capacity mode by the Fourth of July.”

Health officials in the state need to “get those emergency plans in place because, at this point, I don’t see an alternative but to go to crisis standard prepare in Arizona probably, probably in 10 days, maybe less,” Humble said.

Arizona is one of five states with the most new cases, reporting 3,779 cases on Tuesday, according to John Hopkins.

In Florida, officials have pointed to Miami-Dade County as one of the hardest-hit areas in the state but say patients requiring hospitalizations seem to be younger and less sick, according to reporting from the Miami Herald. One physician told the newspaper many infections can be attributed to community spread.

The observation echoes announcements by many city and state leaders in recent days — particularly in the South — which highlighted that cases seem to be shifting to younger groups. In many cases, officials pointed back to instances including parties and bars as sources of recent clusters.

New research suggests Black Lives Matter protests across the country have not led to a spike in cases.

The EU is working with member nations to decide which travelers would be considered safe to visit the bloc starting July 1. That criteria will be focused on the “circulation of the virus,” one EU diplomat said.

Officials will also look at a checklist that asks whether travelers come from a country that can “be considered as being in a comparable or better epidemiological situation as the average in the EU+ area.”

In a statement, the State Department said it advised Americans to continue checking the websites of relevant embassies for information including on entry restrictions and quarantine policies.

“We are committed to coordinating with our European partners and allies as we look forward to reopening our economies and easing restrictions,” the statement said.

Experts have expressed concern that even states who may be seeing temporary dips in cases could begin seeing dangerous rises again as they begin reopening and more residents venture out.

“Let’s keep playing it safe: social distance & face coverings, even at the beach!”

“We’ve seen an INCREASE in the percentage of #COVID19 cases between the ages of 18-29,” he said on Twitter. “Do the right thing. Wear a mask. Keep your distance. Wash your hands. Don’t be a knucklehead.”

In posthumous message, Alex Trebek asks viewers to ‘be thankful,’ ‘keep the faith’