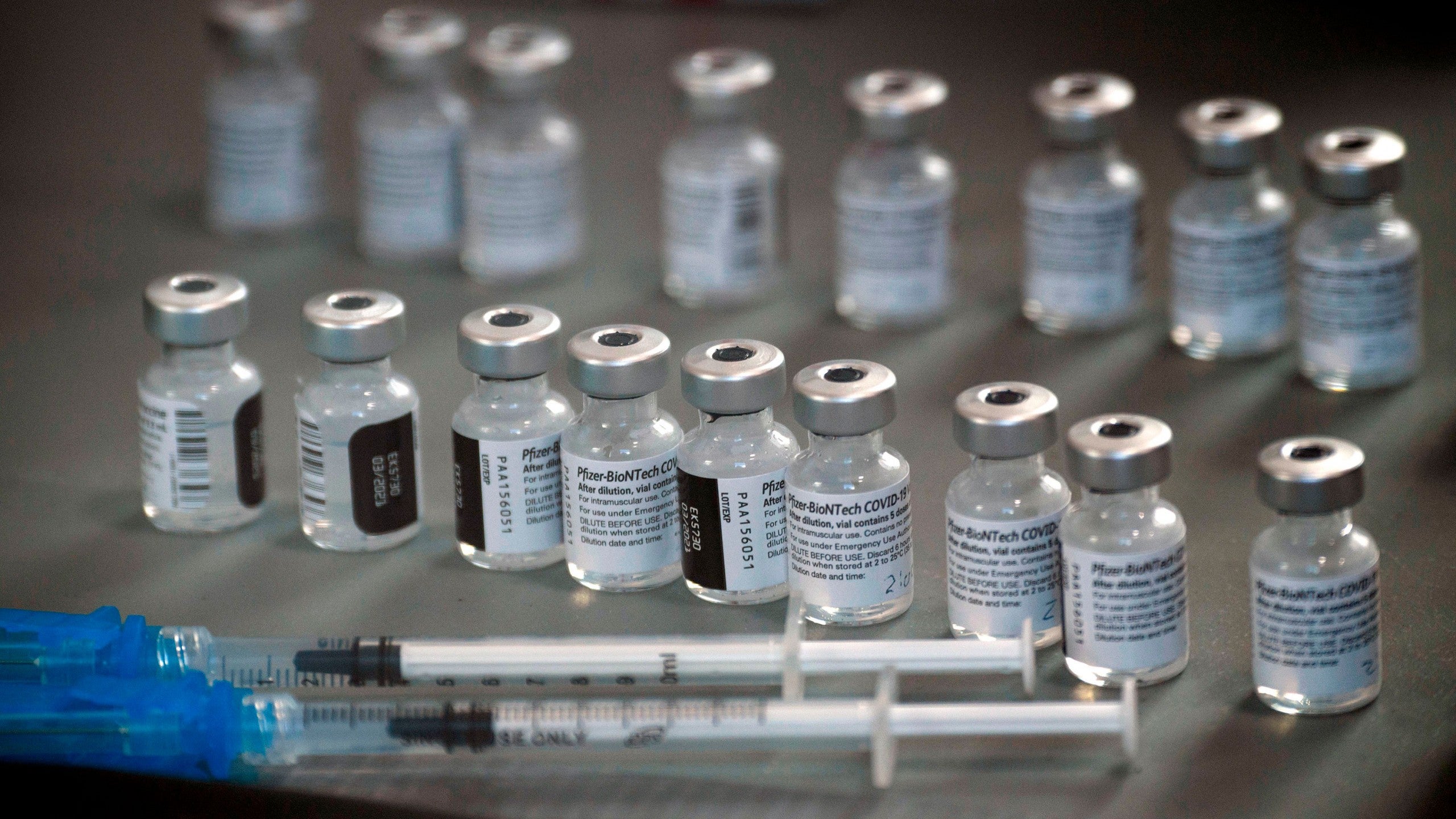 Syringes wand vials of the Pfizer-BioNTech Covid-19 vaccine are prepared to be administered to front-line health care workers under an emergency use authorization at a drive up vaccination site from Renown Health in Reno, Nevada on December 17, 2020. (Photo by Patrick T. Fallon / AFP) (Photo by PATRICK T. FALLON/AFP via Getty Images)
by: By Ramishah Maruf, CNN Business
Posted: Mar 25, 2021 / 05:24 PM EST / Updated: Mar 25, 2021 / 05:24 PM EST

(CNN) — As vaccine eligibility expands across the United States, more companies are offering incentives to get a jab.

Many US companies are debating whether to mandate vaccines. Over 70% of current or recent CEOs of major companies said they were open to requiring vaccines, a poll by the Yale Chief Executive Leadership Institute said.

“I think the right thing to do is for United Airlines, and for other companies, to require the vaccines and to make them mandatory,” Scott Kirby, the United CEO told investors on an earnings call in January.

But not all CEOs agree. Although some industries, such as the healthcare sector, may require vaccines, others are instead offering various incentives to employees.

Depending on the industry, some employees may receive gift cards, whileothers are offered free rides to vaccination sites. These are the companies that are paying their employees to get vaccinated.

In January, the discount grocery chain announced it will give its hourly workers four hours total of PTO to get vaccinated. Aldi emphasized the vaccine would not get in the way of employees’work or pay.

Employees who get vaccinated will get an extra day off next year and $50 in American’s employee recognition program.

“I think from our standpoint we’re highly encouraging our team members to go out and get the vaccine,” AA Chief Operating Officer David Seymour said.

Amtrak is givingemployees a bonus of two hours of pay when they show proof of their vaccination, as well as excusing absences for those who get vaccinated during work hours.

Bolthouse Farms is offering its employees a $500 bonus if they show proof of vaccination, the Wall Street Journal reported. The company also holds vaccination clinics weekly at a company facility.

The discount store popular in rural areas is giving its employees a stipend worth four hours of work to get vaccinated. Dollar General won’t make the vaccine mandatory for its more than 150,000 employees.

“We do not want our employees to have to choose between receiving a vaccine or coming to work,” Dollar General said in a press release.

In February, Instacart began giving a $25 “vaccine support stipend” to in-store employees and independent contractors. To be eligible, shoppers need to havedelivered five times in a month.

Kroger employees will get a one-time payment of $100 if they showproof of vaccination. Workers who don’t get the vaccine for religious or health reasons can take a health and safety course and receive the payment.

“We are strongly encouraging all customers and associates to receive the vaccine to curb the spread of Covid-19, and we’ll do all we can to ensure they have access as soon as it’s available,” Dr. Marc Watkins, Kroger’s chief medical officer, said in a statement.

In January, the grocery chain announced it will give $200 ofextra pay to its US employees who choose to get the vaccine. Lidl has more than 125 stores across east coast states.

Workers at both corporate headquarters and restaurants will get up to four hours of paid time off to get vaccinated.

The popular southern grocery chain is giving its employees $125 gift cards when they show proof of vaccination.

Target is giving its workers free rides to vaccination sites. The company announced in February that US employees will be eligible for up to $15 in Lyft rides each way to and from their appointments. Hourly employees will also receive up to four hours of pay.

“As we have for the past year, we’ll continue to invest in our team’s pay and benefits so they can take care of themselves, each other and our guests,” Chief Human Resources Officer Melissa Kremer said in a statement.

The California-based grocery store is giving itsworkers an additional two hours of pay for each dose theyreceive.