US COVID-19 surge via variant could affect younger people 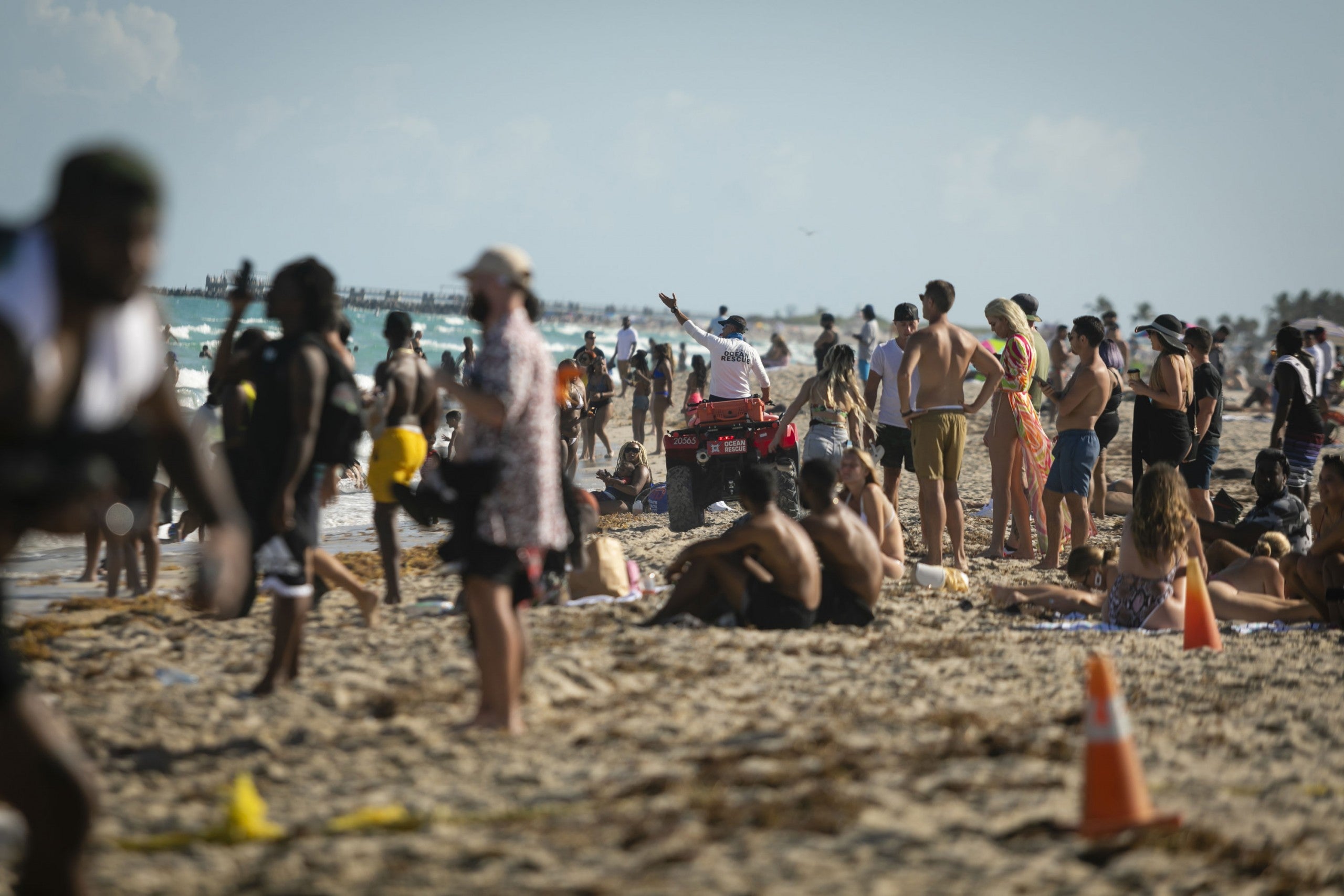 (CNN) — Experts say COVID-19 vaccinations in the United States are going extremely well — but not enough people are protected yet and the country may be at the start of another surge.

The United Statesreported a record over the weekend with more than 4 million COVID-19 vaccine doses administered in 24 hours, according to the Centers for Disease Control and Prevention.

And the country now averages more than 3 million doses daily, according to CDC data.

But only about 18.5% of Americans are fully vaccinated, CDC data shows, and COVID-19 cases in the country have recently seen concerning increases.

“I do think we still have a few more rough weeks ahead,” Dr. Celine Gounder, an infectious diseases specialist and epidemiologist, told CNN on Sunday. “What we know from the past year of the pandemic is that we tend to trend about three to four weeks behind Europe in terms of our pandemic patterns.”

The highly contagious B.1.1.7 variant has fueled an alarming rise in COVID-19 cases and hospitalizations in parts of Europe. Experts worry the United States could be next if Americans don’t double down on safety measures until more people are vaccinated.

What’s worse, experts say, is that the variant is changing the pandemic’s playbook and could spell trouble for younger groups that haven’t yet been vaccinated.

“We have to think about the B.1.1.7 variant as almost a brand new virus,” said Dr. Peter Hotez, dean of the National School of Tropical Medicine at Baylor College of Medicine. “It’s acting differently from anything we’ve seen before, in terms of transmissibility, in terms of affecting young people, so we have to take this very seriously.”

“We know that these increases are due, in part, to more highly transmissible variants, which we are very closely monitoring,” Walensky said.

She also said that a number of the clusters identified among young people are connected to participation in youth sports and extracurricular activities. The CDC guidelines suggest those activities should be limited.

“I understand that people are tired and that they are ready for this pandemic to be over, as am I,” Walensky said. “Please, continue to hang in there, and to continue to do things that we know prevent the spread of the virus.”

The difference between previous surges and another possible surge now is “the people most affected now are the younger individuals,” emergency physician Dr. Leana Wen told CNN on Sunday.

Older populations have been prioritized nationwide for COVID-19 vaccinations. More than 54% of Americans 65 and older have been fully vaccinated, according to the CDC, while more than 75% of that same age group have gotten at least one COVID-19 vaccine dose.

But while that age group is now relatively well protected, Wen said, younger groups are still vulnerable as the B.1.1.7 variant circulates. The variant is more contagious and may cause a more severe iteration of the disease, experts have said. Research suggests it may also be more deadly.

“We’re seeing in places like Michigan that the people who are now getting hospitalized by large numbers are people in their 30s and 40s,” Wen said. “And now we’re even seeing children getting infected in larger numbers, too.”

“What we’re seeing is pockets of infection around the country, particularly in younger people who haven’t been vaccinated, and also in school-aged children,” former Food and Drug Administration commissioner Dr. Scott Gottlieb told CBS’s “Face the Nation” on Sunday.

“If you look what’s happening in Michigan, in Minnesota, in Massachusetts, for example, you’re seeing outbreaks in schools and infections in social cohorts that haven’t been exposed to the virus before.”

“The infection is changing its contours in terms of who’s being stricken by it right now,” he added.

In Florida’s Orange County, officials reported late last month a rise in COVID-19 cases in the 18-to-25 age group.

And a third of all of the county’s COVID-19 hospitalizations were people younger than 45, according to Dr. Raul Pino, director of the Florida Department of Health in Orange County.

New Jersey officials said last week that variants, including the B.1.1.7 strain, were contributing to a rise in cases and hospitalizations — including in younger age groups.

Between the first and last weeks of March, there was a 31% and 48% increase, respectively, in the number of hospitalizations among the 20-29 and 40-49 age groups, state health commissioner Judy Persichilli said Wednesday.

How we can curb another surge of infections

Despite alarming warning signs, the United States is not powerless, experts have stressed.

“We say it over and over again and we need the local people, we need the governors and the mayors and others to be able to say, ‘We’re not out of it yet,'” Fauci said.

“People say, ‘Well, you just want to confine us forever.’ No, this is not going to last forever because every day that you get four million, three million people vaccinated, you get closer and closer to control.”

Hotez estimated Sunday that Americans need to hold on for “another four to six weeks, and then we’ll be on the other side of it.”

“All the vaccines seem to work just as well against this UK-B.1.1.7 variant … so that is really good news,” he said. “I have a lot of confidence that we’re going to be in a really good place by the summer.”

“But if you’re not vaccinated, you have to behave as though you’re highly vulnerable to this virus. This is not a time to get sick,” Hotez added.

The Transportation Security Administration says it screened 1.54 million people at airports across the country on Sunday, just shy of a pandemic record set Friday when 1.58 million people flew. More than 6 million people have flown since Thursday.

Sunday’s screening rate is more than ten times greater than the bottomed-out figures of a year ago, but still well below 2019 levels. TSA figures have been higher than 1.5 million for three of the last seven days and higher than one million for 25 days in a row.

On Friday, the CDC said those who are fully vaccinated can now travel at low risk to themselves, but said non-essential travel should still be avoided.

Delta Air Lines said it had to fill some middle seats on weekend flights to keep up with demand, even though its cap on seating capacity does not end until May 1.

The decision on whether to delay second doses of COVID-19 vaccines in order to get first doses into as many people as possible may depend on available supply, Dr. Kent Sepkowitz, an infectious disease specialist at Memorial Sloan Kettering, told CNN on Monday.

“If the stockpile is running low, then yeah, I think we ought to optimize ‘pretty good’ vaccination for more people than ‘super-duper’ protection for fewer,” Sepkowitz said.

“If, however, the vaccine stockpile isn’t so sparse,” he added, “then I think we plow ahead with what we’re doing” — which means sticking with a two-dose regimen for the Pfizer/BioNTech and Moderna vaccines.