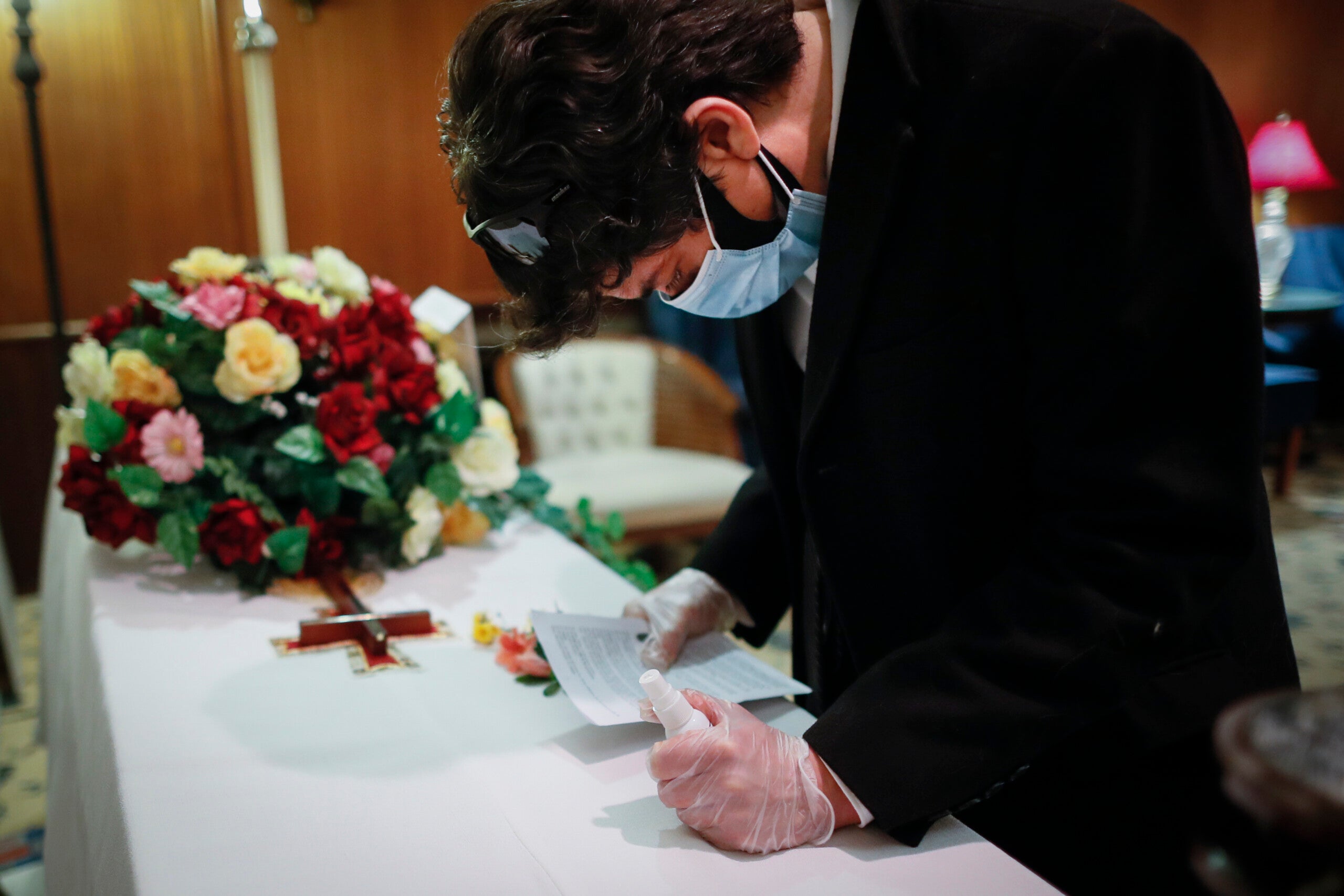 (AP) — When Brittany Palomo was hired as a nurse in March, her parents tried to talk her out of it, fearful of the fast-spreading coronavirus. All the more reason, she told them, to start the career that had been her long-held dream.

“Wake up, my little girl, wake up!” Palomo’s mother, Maria Palomo Salinas, screamed, her grief echoing through a Harlingen, Texas, hospital, when her daughter died of COVID-19 complications around 2 a.m. on a Saturday in late November.

Palomo was 27 and, as a health care worker, was probably weeks away from getting the new vaccine that could have protected her from the virus. Instead, she became yet another victim of the relentless outbreak whose U.S. toll is accelerating as it eclipses another round-number mark.

“The numbers are staggering — the most impactful respiratory pandemic that we have experienced in over 102 years, since the iconic 1918 Spanish flu,” Dr. Anthony Fauci, the government’s top infectious-disease expert, said days before the U.S. reached the milestone.

The U.S. crossed the 300,000 threshold on the same it day it launched the biggest vaccination campaign in American history, with health care workers rolling up their sleeves for COVID-19 shots Monday.

The death toll was reported by Johns Hopkins University from data supplied by health authorities across the U.S. The real number of lives lost is believed to be much higher, in part because of deaths that were not accurately recorded as coronavirus-related during the early stages of the crisis.

It took four months for the virus to claim its first 100,000 American lives. But with cold weather driving people inside, where the virus spreads more easily, months of reluctance in many states to require masks, and an increase in gatherings over the holidays, some public health experts project 100,000 more could die before the end of January.

“It can certainly feel like you’re standing on the beach and sandbagging a tsunami,” said Dr. Leon Kelly, who attends to both the dead and the living as coroner for El Paso County, Colorado, and deputy medical director of its public health department.

Already, the number of dead in the U.S. rivals the population of St. Louis or Pittsburgh. The toll is equivalent to repeating a tragedy on the scale of Hurricane Katrina every day for 5 1/2 months.

“To me it represents an extraordinary failure in our response,” said Jennifer Nuzzo, a public health researcher at Johns Hopkins, contrasting U.S. officials’ scattershot response with the massive mobilization after nearly 3,000 Americans were killed in the 9/11 terrorist attacks.

“To think, now we can just absorb in our country 3,000 deaths a day as though it were just business as usual. It just represents a moral failing.”

The U.S. accounts for nearly 1 out of 5 confirmed virus deaths worldwide, far more than any other country despite its wealth and medical resources.

While the pandemic’s toll continues to soar, much has changed since the U.S. surpassed 200,000 deaths in late September.

Scientists’ furious pursuit of a vaccine is finally delivering results, beginning with the rollout of Pfizer’s formula. If a second vaccine is authorized soon, as expected, 20 million people could be vaccinated by month’s end.

At the same time, the country is poised for a major shift after an election that was, in large part, a referendum on the Trump administration’s handling of the virus. President-elect Joe Biden has made clear his first priority upon taking office next month will be a comprehensive overhaul of efforts to defeat the infection.

Still, experts said, it could take well into the new year for the first wave of vaccines and other precautions to bring cases and deaths under control. Experts are warning the country must steel itself for a deadly winter.

“We are heading into probably the worst period possible because of all the things we had in the spring, which is fatigue, political resistance, maybe the loss of all the good will we had about people doing their part,” Nuzzo said.

More than 109,000 people with the virus are now in U.S. hospitals, according to the COVID Tracking Project, far eclipsing the 60,000 who filled wards during the previous peaks in April and July.

On a single day last week, the U.S. recorded more than 3,300 COVID-19 deaths, easily exceeding the heights reached in April, when the New York City area was the epicenter.

Doctors now have far more experience in treating patients, and a few drugs have been approved to speed recovery. But the toll now is far more widespread, reaching into rural areas and small and medium-size communities that don’t have big-city resources.

In Waterloo, Iowa, Dr. Stacey Marlow called the wife of an 89-year-old COVID-19 patient in his final hours, not realizing until well into the conversation that the couple’s son had also died of the virus in her hospital just two days earlier.

“We see these horror stories every day so they start to run together,” said Marlow, who works in the emergency room at UnityPoint Allen Hospital.

In Los Angeles, the county’s health director, Barbara Ferrer, fought tears during a televised briefing last week as she reported a steep rise in local deaths, up to an average of 43 each day, compared with roughly a dozen in mid-November.

“Over 8,000 people who were beloved members of their families are not coming back,” Ferrer said.

In Columbia, South Carolina, the family of a third-grade teacher, Staci Blakely, asked the school district to announce her death in hopes of persuading the public to take the virus seriously.

“One of the ways we can celebrate her life is being sure that we continue to take care of each other,” schools Superintendent Greg Little said.

And then there are the families and colleagues of health care workers who are still being lost to COVID-19, even as hope draws within view.

For weeks now, Dr. James Williams has been hearing the voice of his friend Dr. Juan Fitz, an emergency room physician in Lubbock, Texas, who was hospitalized for the virus this fall after months of triaging COVID-19 patients.

“I am airborne. I am cavalry,” the 67-year-old Fitz said over the summer, describing his role in taking on the pandemic. “I go into the thick of it and, challenged by the situation, find ways to improve and sort things out.”

“I’m sorry, it still gets me,” a distraught Williams said Friday, hours before the first vaccine won approval. Choking back tears, he recalled his last text message to Fitz, one the soldier-in-scrubs never answered.

Please know, he wrote, “you have an Army of friends and colleagues pulling for you.”