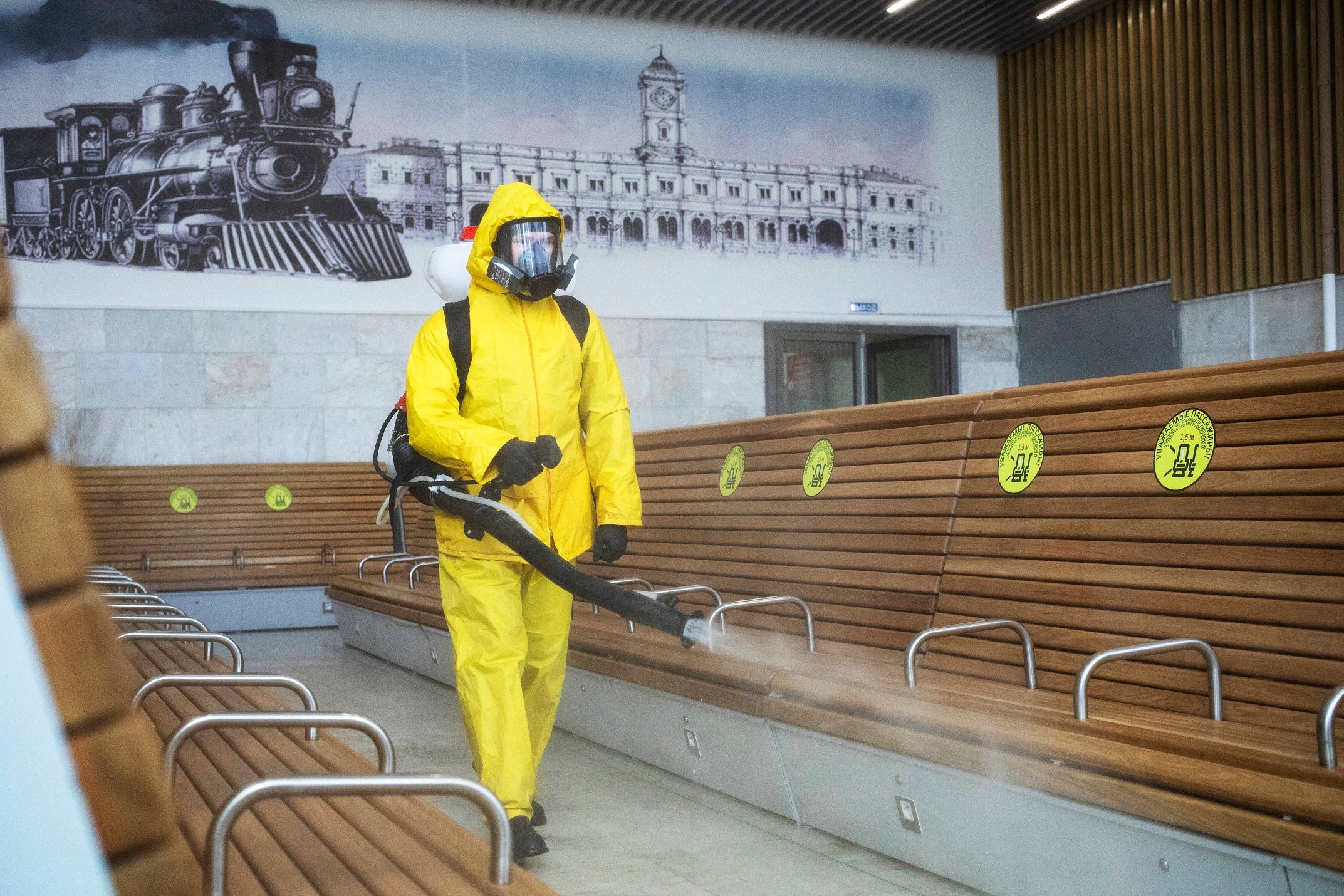 An employee of the Federal State Center for Special Risk Rescue Operations of Russia Emergency Situations disinfects a hall of Leningradsky railway station in Moscow, Russia, Tuesday, May 19, 2020. Russia has continued to see a steady rise of new infections, and new hot spots have emerged across the vast country of 147-million people that ranks the second in the world behind the United States in the number of coronavirus cases. (AP Photo/Pavel Golovkin)
by: VLADIMIR ISACHENKOV, ELENA BECATOROS and NICK PERRY Associated Press
Posted: May 19, 2020 / 01:33 PM EST / Updated: May 19, 2020 / 01:33 PM EST

MOSCOW (AP) — As the coronavirus outbreak eases in Western Europe and parts of the U.S., cases are rising steadily in Russia in a crisis that has damaged President Vladimir Putin’s standing and stirred suspicion that the true death toll in the country is being concealed.

Russia is now behind only the United States in the number of reported infections. Cases are also spiking in such places as India, South Africa and Mexico.

On Tuesday, new hot spots emerged in Russia, and the country recorded nearly 9,300 new infections in 24 hours, bringing the total to almost 300,000, about half of them in Moscow. Authorities say over 2,800 people with COVID-19 have died in Russia, a figure some say is surely higher.

Some experts argue Russian authorities have been listing chronic illnesses as the cause of death for many who tested positive for the virus. Officials angrily deny manipulating statistics, saying Russia’s low death toll reflects early preventive measures and broad screening. Nearly 7.4 million tests have been conducted in the country of 147 million people.

The U.S. has recorded 1.5 million confirmed infections and over 90,000 deaths.

In Russia’s second-largest city of St. Petersburg, a virus hot spot, all burials now must be with closed coffins as a precaution, irrespective of the cause of death. Previously the measure applied only to COVID-19 deaths. The country’s prime minister, Mikhail Mishustin, resumed work Tuesday after a bout with the disease.

Putin’s approval ratings sank last month to 59%, the lowest in the two decades he has been in power, Russia’s independent pollster Levada Center reported. The plunge reflects growing mistrust and uncertainty among Russians, Levada said.

Putin has declared that a partial economic shutdown imposed in late March helped slow the outbreak and prevented the health care system from being overwhelmed. A week ago, he ended the nationwide lockdown, giving Russia’s 85 regions a free hand to ease their restrictions. But some have been struggling.

The mostly Muslim province of Dagestan has reported a spike in infections that left its hospitals overflowing.

The Kremlin has been accused of sending mixed messages.

“On one hand, Putin wanted people to stay home and observe lockdown restrictions, so Russians were being told about the dangers of the coronavirus,” said former Kremlin speechwriter turned political analyst Abbas Gallyamov. “On the other hand, the president didn’t want the situation to look too alarming. … So Russians were also being told that it’s not that bad.”

The surges come as much of Asia, Europe and many U.S. states have been easing lockdowns to restart their economies as new infections wane. U.S. autoworkers, French teachers and Thai mall workers are among hundreds of thousands of employees back at work with new safety precautions.

Cases are still rising across Africa, where all 54 nations have seen confirmed infections for a total of over 88,000 cases and 2,800 deaths, according to the Africa Centers for Disease Control and Prevention.

South Africa has the highest number of cases at over 16,400, with nearly 290 deaths. Infections have increased dramatically in Cape Town and the surrounding Western Cape province, which now accounts for 61% of South Africa’s total.

Latin America has seen more than 480,000 confirmed coronavirus cases and about 31,000 dead. The highest number of cases is in Brazil, which became the world’s third worst-hit country Monday with more than 250,000 infections despite limited testing. Hospital officials reported that more than 85% of intensive care beds are occupied in the states of Rio de Janeiro and Sao Paulo.

Some countries have seen encouraging signs reverse: Iran reported a steady drop in new infections through April, only to see them rise again in May.

But there is new hope after an experimental vaccine against the coronavirus yielded encouraging results, though in a small and extremely early test.

In a surprise announcement, President Donald Trump said he has been taking the malaria drug hydroxychloroquine to protect against the virus even though scientists say there is no evidence of its effectiveness against the disease and his own administration has warned it should be administered only in a hospital or research setting because of potentially fatal side effects.

In India, cases surged past 100,000, and infections are rising in the home states of migrant workers who fled cities and towns during a nationwide lockdown when they lost their jobs.

India is now seeing more than 4,000 new cases day. States including West Bengal, Bihar, Odisha and Gujarat, the major contributors of India’s migrant labor, are showing major spikes in infections as the country’s lockdown rules have eased. More than 3,100 with COVID-19 have died, according to India’s Health Ministry.

In Latin America, intensive care units in the Chilean capital of Santiago have been beyond 90% capacity for days, and officials warned that intensive care staff members are reaching their limits.

“They can’t keep going forever, no matter how many beds or ventilators there are,’’ said Claudio Castillo, a professor of public policy and health at the University of Santiago.

Infections are also increasing in poor areas of Buenos Aires, the capital of Argentina, where authorities relaxed strict lockdown measures last week, allowing some businesses to open and children to walk outside on weekends.

Colombia struggled with an outbreak in Leticia, a city on the border with Brazil, where hospitals were overwhelmed and patients were being sent to commandeered hotels. Colombia has recorded about 16,300 confirmed cases and close to 600 dead.

More than 4.8 million people worldwide have been confirmed infected, and about 320,000 deaths have been recorded, according to a tally by Johns Hopkins University that experts believe is too low.