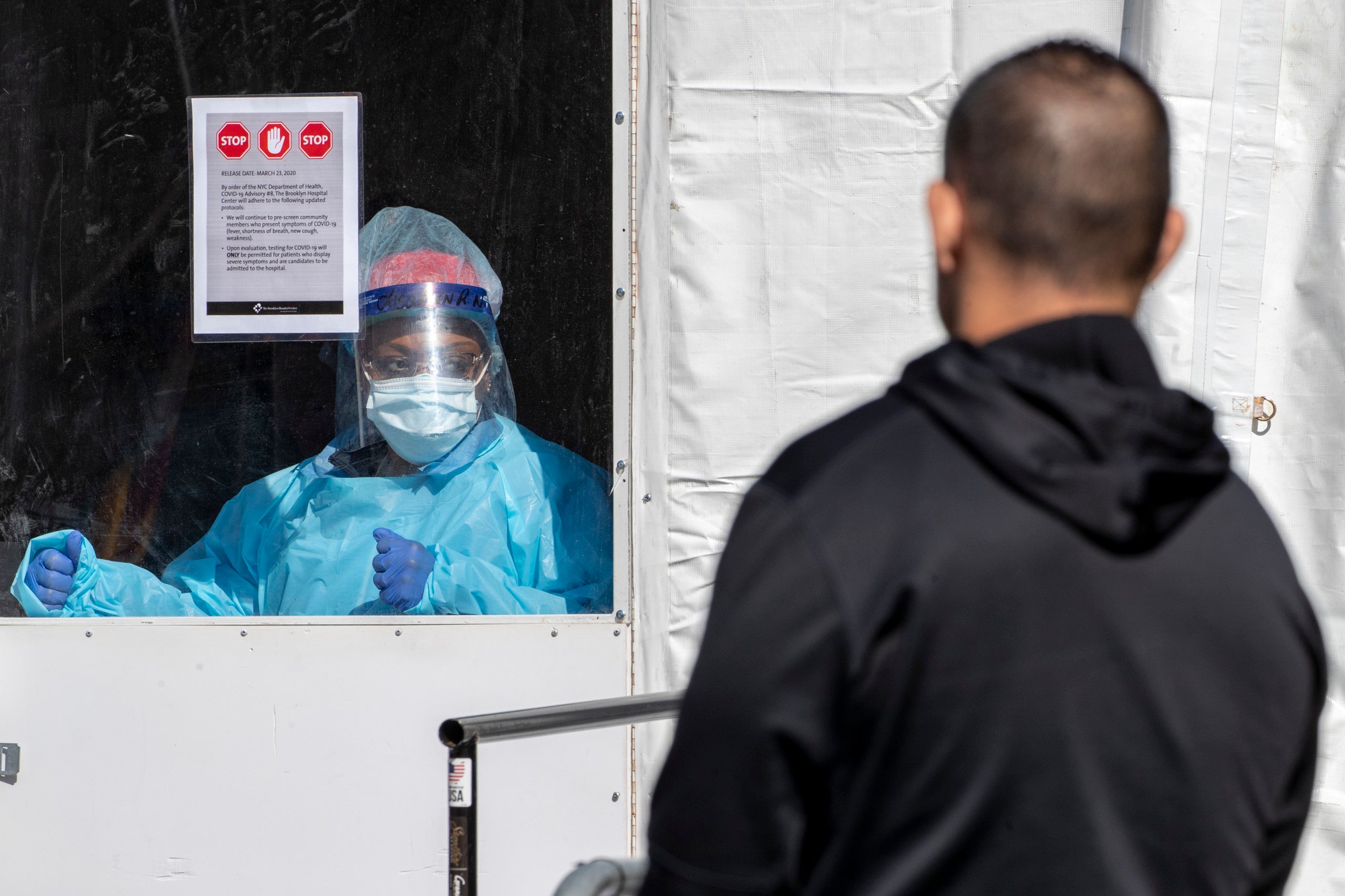 FILE - In this March 26, 2020 file photo a member of the Brooklyn Hospital Center COVID-19 testing team calls in the next patient in line in the Brooklyn borough of New York. Having access to quick coronavirus test results will play an important role in resuming sporting events, keeping factories and businesses open, and returning to school in the fall. But an Associated Press survey of selected states found it’s still taking days in some cases for results to come back despite an increase in the availability of testing across the U.S. Public health experts say testing delays present a major hurdle to reducing infections. (AP Photo/Mary Altaffer, File)
by: CHRISTINA A. CASSIDY, Associated Press
Posted: Jun 25, 2020 / 03:37 PM EST / Updated: Jun 25, 2020 / 03:37 PM EST

ATLANTA (AP) — As part of the plan to restart its season next month, the NBA is preparing to test hundreds of players, coaches and others for the coronavirus each night inside a “basketball bubble” — a space at the Disney complex near Orlando, Florida, with extra protection against the disease.

Test results will be expected back the next morning, before the day’s practices and games begin. That sort of rapid turnaround is the gold standard for tracking a highly contagious disease that is on the rise again in parts of the country. Yet an Associated Press survey of selected U.S. states shows the benchmark is rarely met for the general public.

Having access to quick test results will play an important role in resuming sporting events, keeping businesses and factories open, and returning to school in the fall. But the AP survey found it sometimes still takes days for results to be returned, despite an increase in the availability of testing across the country.

The situation is even worse in many hot spots around the world, including South Africa, where results have sometimes taken up to 12 days.

Judy Clinco, owner of Catalina In-Home Services in Tucson, Arizona, has had to test about 30 of her 110 staffers, who provide care and assistance to seniors in their homes. They are not able to visit clients until the results are back, which typically takes a week to 10 days.

As many as seven employees have been sidelined at once, Clinco said.

“During that time, the caregiver is not working. We are subsidizing their wages, and it’s a financial burden to the company,” she said. “It leaves us with one less caregiver to be on assignment, and that leaves us short-staffed.”

Public health experts say testing delays present a major hurdle to reducing infections and tracking those who have been in close contact with a person who is positive for the virus.

That’s why researchers are working to develop rapid tests that can be cheaply produced, self-administered and provide immediate, reliable results. For now, most tests to diagnose COVID-19 require laboratory processing, which means a built-in delay.

Guidelines issued by the Centers for Disease Control and Prevention recommend that states, as they lift final virus restrictions, have a turnaround time of less than two days.

But it’s unclear whether states have access to detailed data showing whether they are meeting the CDC standard, including how long it takes to process tests at independent labs. Labs track their own turnaround times, but the CDC said data such as how long it takes for a test to get to a lab and for a provider to receive the result and notify the patient are not tracked. That makes it difficult to determine a “meaningful average” of what patients are experiencing in each state.

In the absence of publicly available federal data, the AP earlier this month surveyed nine states that were experiencing a 14-day uptick in new positive cases, plus New York, which has had the most COVID-19 cases.

The state lab in New York was taking up to three days to report results to patients. California officials said the statewide turnaround time was 48 to 72 hours, depending on the lab. In Utah, anecdotal information suggested that results took 24 to 72 hours.

Most of the 10 states surveyed said they did not have data on turnaround times for commercial labs in their state, creating another information gap. Health experts said this was not unusual, that state health departments have not typically been responsible for tracking individual laboratory turnaround times.

“It’s a good question of who should be responsible for tracking this information and providing it back to the public,” said Kelly Wroblewski, director of infectious diseases with the Association of Public Health Laboratories.

There are other factors that can cause delays, from the time of day the test is taken to whether a lab shuts down for the evening. Staffing issues and shortages of testing supplies also can slow the process.

Even people visiting the same testing location can have widely different experiences.

Earlier this month, Jeff Barnes, a music therapist in metro Atlanta, went to the same drive-thru testing location a week after his wife and two daughters. They were still waiting when he received his results the next day. Theirs wouldn’t come for seven days.

Barnes said he was concerned what a similar delay would mean if schools reopen in the fall.

“They are going to have to make it more efficient,” Barnes said. “If I knew (my daughter) was in a classroom with 20 kids and 10 of them had results pending, I don’t know that I would send her.”

Until rapid tests are widely available, health experts say it will continue to take a day or two to get results under the best circumstances. That creates more opportunities for people who might be infected but feel fine to pass the virus along to others.

In late April and May, the state lab in Alabama had trouble acquiring reagents, the chemical substances used to process tests. That led to intermittent delays in reporting results, up to five days from when the lab received the specimen, according to Dr. Karen Landers, assistant state health officer with the Alabama Department of Public Health.

Those problems have since been resolved, and the lab now has a turnaround time between 24 and 72 hours from the time it receives samples.

One of the largest commercial laboratories, Quest Diagnostics, recently reported its average turnaround time as one day for priority patients and two to three days for all other populations. The company said it expects increased demand to result in longer waits of more than thee days.

Other countries face similar challenges. Wait times in China vary by city, from as little as one day in Shanghai to four days in Wuhan, where the virus first emerged. In Japan, tests usually yield results within two days. Mandatory tests, such as those at airports, often come out sooner, according to the health ministry.

Results in India initially took around 24 hours. But as infections and testing increased, so did delays. Now results often take two to three days or as long as a week, depending on location.

By contrast, South Korea won praise for its quick efforts to launch a program that included free drive-thru testing with results usually delivered within 24 hours.

Back in the U.S., Amazon plans to spend at least $300 million on a worker testing program that includes building its own laboratory. But even with the wealth and influence of the nation’s second-largest private employer, results are still expected to take three to five days. Officials said they hope to reduce the turnaround time to between 24 and 48 hours.

“We don’t know exactly yet how it’s going to shape up,” Amazon said in a statement, “but we continue to believe it’s worth trying.”