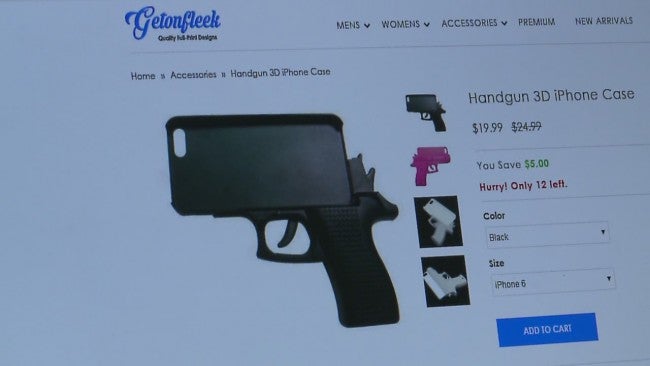 INDIANAPOLIS (WISH) – Phone cases do more than protect a phone. They can showcase style or personality. But there’s one in particular a city leader is worried will send the wrong message and possibly get the owner hurt.

They’ve got patterns and colors or they’re simple and to the point. “It’s just a plain clear case that I found at the store,” Bobbi Gordon said as she looked down at her iPhone. “I’ve got a few other ones I like to cycle through.”

But there is one phone case that City-County Councillor Leroy Robinson wants to keep out of people’s hands.

“Why? I mean it’s just a phone case,” said Bryan of Indianapolis.

“Can’t figure out what kind of case that would be,” added Gordon.

When asked to search on the Internet for “replica gun mobile phone case,” and they got their answer.

The cases look similar to an actual gun. They have a grip, trigger and barrel. The colors found on the internet included black, white and pink.

“It’s pretty cool,” said Bryan once he saw a picture. “But it don’t make sense to ban them just because it’s shaped like a gun handle.”

Robinson thinks it makes perfect sense. He worries the public and specifically police might mistake the replica case for the real thing.  Whether it’s sitting on the seat of a car or sticking out of a pocket, a spot many people carry their phone, he doesn’t want police to have to make a split second decision.

“Seeing those cell phone cases the way they look like an identical gun, (police are) going to have to make a decision and unfortunately that decision is going to be to protect his or her life,” he said. “I wouldn’t want that to happen to either the officer or the individual.”

After hearing the rationale behind the proposed ban, Bryan started to come around. “I can see that a cop would want it off the street or someone you know. They could think it’s a regular gun or something,” he said.

IMPD said it hasn’t had any problems involving a person carrying a replica gun phone case. Robinson wants to keep that way. There weren’t any for sale at a phone case stand at a store downtown, but Robinson said parents have told him the replica cases are being sold at other locations in the city.

“They’re targeting most of the urban communities. That’s unacceptable,” he said.

The cases might be fake, but the concern is real.

“It’s a safety issue,” said Gordon. “Nobody knowing what you really have in there and how often people put them in their back pockets and reach for phones, looks like you’re trying to pull a gun on someone.”

Robinson’s proposal went before the City-County Council Monday night. It’s now on its way to committee for review.

Robinson said that Police Chief Rick Hite supports the idea. He also mentioned how other cities, like Chicago, have already adopted similar bans.

For now, Robinson wants to ban the sale. Later down the road he’d like to make it illegal to own one.