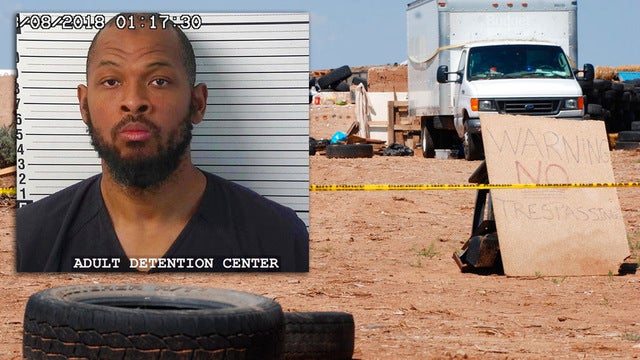 TAOS, N.M. (AP) — Prosecutors say in court documents that the father of a missing Georgia boy was training children at a New Mexico compound to commit school shootings.

The documents say Siraj Ibn Wahhaj was conducting weapons training with assault rifles at the compound near the Colorado border where 11 hungry children were found in filthy conditions.

Prosecutor Timothy Hasson filed the documents while asking that Wahhaj be held without bail after he was arrested last week with four other adults facing child abuse charges.

Prosecutors did not bring up the school shooting accusation in court on Wednesday during an initial appearance by the abuse suspects.

Authorities say the remains of a boy also were found at the compound but have not been positively identified by medical examiners.

The child, Abdul-ghani Wahhaj, went missing in December in Jonesboro, Georgia, near Atlanta.

Authorities say his father had told the boy’s mother that he wanted to perform an exorcism on the child. He later said he was taking the child to a park and didn’t return.

For months, neighbors worried about the squalid compound built along a remote New Mexico plain, saying they took their concerns to authorities months before sheriff’s officials raided the encampment, described as a small camping trailer in the ground.

Authorities said during the raid Friday that they had found the father armed with multiple firearms, including an assault rifle. They also said they believed there was a shooting range on the site.

The group arrived in Amalia in December, with enough money to buy groceries and construction supplies, according to Tyler Anderson, a 41-year-old auto mechanic who lives nearby.

He said he helped the newcomers install solar panels after they arrived but eventually stopped visiting.

Anderson said he met both of the men in the group, but never the women, who authorities have said are the mothers of the 11 children, ages 1 to 15.

Anderson did not recall seeing the Georgia boy who was missing. But he said some of the smaller children from the compound turned up to play with children at neighboring properties after the group first arrived.

“We just figured they were doing what we were doing, getting a piece of land and getting off the grid,” said Anderson.

As the months passed, however, they stopped seeing the smaller children playing in the area. They also stopped hearing guns fired off at a shooting range on the property, he said.