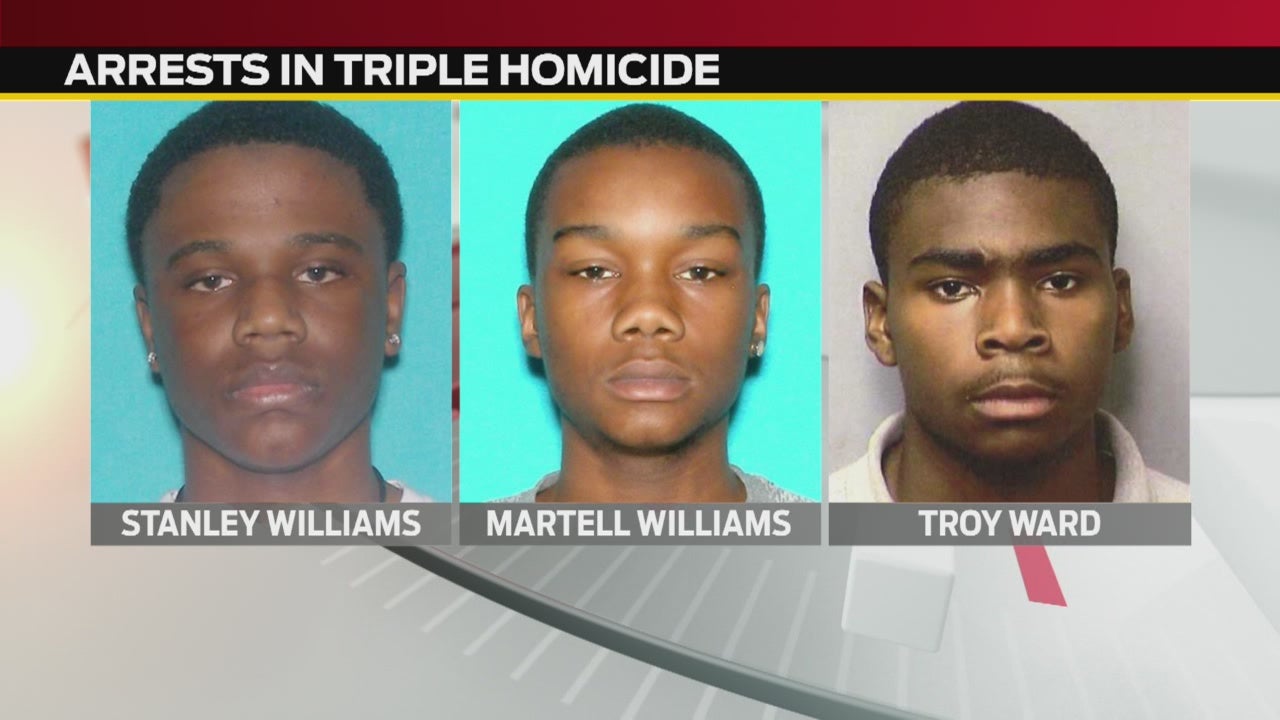 INDIANAPOLIS (WISH) — Five teens in total have been charged after a plan to rob one man of drugs and money became a robbery that left three men dead.

The Marion County Prosecutor announced Thursday that three additional 18-year-olds have been charged in connection to the murder of three men in July on the northeast side.

According to the prosecutor’s office, Martell Williams, Troy Ward and Stanley Williams now face charges in the deadly incident.

Indianapolis Metropolitan Police Department officers were called about 6:15 p.m. July 16 to the 7800 block of Somerset Bay, off 71st Street and Keystone Avenue on reports of a person shot. When they arrived, police found the bodies of 25-year-old Dominique Miller, 25-year-old Jordan Wright and 19-year-old Justin Crowder.

Charging documents show that Troy Ward faces six counts of murder, three counts of robbery resulting in serious bodily injury and one count of carrying a handgun without a license.

On Oct. 18, 18-year-old Devante Gilbert turned himself in at IMPD Headquarters on Tuesday. He faces three counts of robbery resulting in bodily injury in Marion Superior Court, Criminal Division 1, according to online court records.

In July, IMPD arrested a 15-year-old in connection with the three shooting deaths. At the time of his arrest, police explained that the 15-year-old been injured and showed up at a nearby hospital following the tribe shooting, and officers were able to connect him to the incident. At that time, he faced six murder counts and one count of robbery in juvenile court.

Court documents detailing the witness accounts of two women inside the apartment at the time of the incident, as well as narratives provided by the 15-year-old suspect and Gilbert, have shed light on the events that led up to the robbery and murders, as well as the people involved.

After Gilbert picked up Stanley Williams, the three picked up Martell Williams and Troy Ward “because they had the guns needed for the robbery.” According to the 15-year-old suspect, the plan was for Gilbert and Stanley Williams to stay outside in the car, while the other three approached Crowder’s apartment, the 15-year-old in the lead because Crowder would recognize him.

Martell Williams and Ward were crouched down on either side of the 15-year-old suspect outside the door, and as Crowder answered, they pushed open the door. Martell Williams stayed in the front area of the apartment with Crowder while Ward went to a back bedroom and began struggling with a person in that room, later identified as Dominique Miller, according to court documents. The 15-year-old followed Ward into the back bedroom, in an attempt to steal a safe he told police Crowder kept in the room.

One of the women inside the apartment at the time of the deadly robbery told detectives she’d been watching TV in Wright’s bedroom when she heard Crowder talking in the hallway and then the sound of gunshots. She said Wright told her to stay in the bedroom, then he “grabbed his samurai sword” and left the room. She told police she never left the room during the incident.

Police found Wright’s body near Crowder’s in the front area of the apartment, both shot once in the head and once in the chest. Wright was found lying on top of the sword, its sleeve left in the bedroom.

The other woman told police she was in Crowder’s bedroom with Miller when she heard someone knocking and then the sound of gunshots. She said she hid under the blanket on the bed, then saw two males enter the room, who immediately shot Miller. The woman told detectives she recognized one of the people as “a person who had befriended Justin in the past” and had been to the apartment four or five times previously. Court documents say the women heard the suspects talking about grabbing the safe from the room.

According to the 15-year-old’s account, he and Ward carried the safe, along with an AR-15 taken from the apartment, down to the Gilbert’s car, after which all five suspects left the apartment complex for an area near the Lake Nora Apartments, where they tried to slam open or shoot open Crowder’s safe. Officers later located a bullet-holed door from a safe in the area described by the 15-year-old suspect, according to court documents.

The other witness’s version of events, from the perspective of the driver, also describe the arrangements before the robbery and the shooting of the safe afterwards. In addition, he told police that when all five people were back in the car, Ward yelled out, “I’m a murderer, I’m a murderer, everybody in that —king house is dead. I shot a b—-.”

On Tuesday, police said a U.S. Marshals task detained Martell Williams. He was later interviewed by IMPD detectives and arrested.