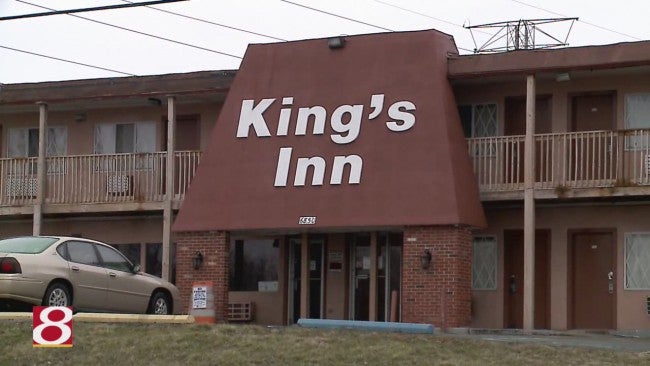 INDIANAPOLIS (WISH) – Tenants at an east side hotel will have to find a new place to stay tonight. That’s because a judge upheld a court order to close down the King’s Inn, located off East 21st Street.

If people are found staying there tomorrow, the owners could he held in contempt of court for not closing the property off. That could lead to fines or possibly even jail time for the owners. Those determinations would be up to a judge.

The past three days of Connie Bishop’s life can be summed up with one look at the pickup truck outside her room.

It’s filled with boxes and belongings, all packed up and ready go. Her family is one of dozens forced to leave the King’s Inn after a court order to close the property was upheld. The hotel had been operating without a license for more than year. On top of that, city prosecutors say it was a magnet for crime.

“IMPD was being drained by that location on the east side,” said Samantha DeWester, City Prosecutor. “There’s been a lot of violent crime, lot of police runs there. It’s unfortunate but it’s something that had to occur.”

Monday, tenants were given a three day notice to move out. Melvin Smitherman had just got off the phone when he talked to us. He was trying to get a new apartment but it won’t be ready for 8 to 10 days. Until then he said he’ll have to go to another hotel.

Others like Bishop are going to stay with family. The attorney for the hotel said the owners plan to abide by court order, which means making sure nobody stays. But it’s clear not everyone is ready to leave.

“We’re gonna stay here until are told otherwise,” said David Anderson who lives at the King’s Inn with his wife and two-year-old daughter.

Bishop has a child as well. And because of that, leaving the hotel is something she always wanted to do. She just didn’t expect it would happen so soon.

“I really feel bad for the all the people that are stuck here and I just hope that they all find a place to go,” she said. “There’s too many people here that pay rent by the month that don’t get their disability checks or whatever until the third (of the month). And they have nowhere to go and no money.”

The King’s Inn was one of four properties the city filed a lawsuit against in November 2013.

The properties were considered a nuisance due to the hundreds of police runs that happened at them each year. City prosecutors don’t like the idea of displacing families but say they have to hold these businesses accountable.

“Hopefully it encourages people to be responsible business owners,” said DeWester. “And when we try to work with you and put you on notice that there are issues, or police are at your facility every single day, you might want to change some of what you’re doing internally as a business model.”

King’s Inn, The Best Inn, and Oak Tree Apartments are the three properties that are closed.

Town and Terrace Condominiums is the last to remain open. The city prosecutor said the case is ongoing.