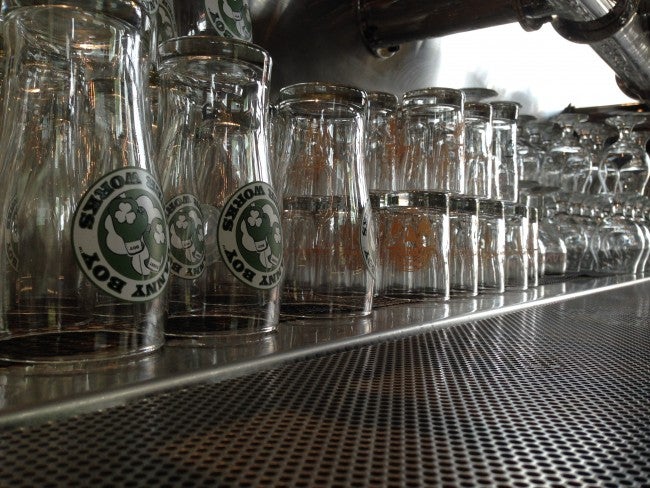 CARMEL, Ind. (WISH) – Kevin Paul has a company in Carmel that does business around the world, even though he has two other companies that serve a primarily Carmel clientele.

But all three companies go together.

Paul owns a bar, a brewery and Blue Horseshoe Solutions. The first two are easy enough to understand. The third, Blue Horseshoe, has been around since 2001. He calls it “a systems integration software company.”

In short, it develops technology that helps clients with shipping, receiving and distribution.  With this system, Paul is establishing a niche among craft brewers in the United States.  He said three of the top 10 craft breweries do business with Blue Horseshoe.

His latest corporate achievement is a project with subsidiaries of Emirates Group, a huge multinational company in the United Arab Emirates. The subsidiaries are among the largest distributors of alcoholic and non-alcoholic beverages in the Middle East. Blue Horseshoe guides them in decisions for beer, wine and liquor distribution from the Middle East to Africa, Asia and Australia.

That goal helped the company land contracts with Pabst brewing which has been around for more than a century, and with the growing craft breweries. The latter client list features Bell’s Brewery of Michigan, New Belgium of Colorado and Stone Brewing of California.

“A lot of these organizations,” Paul said, “started as true artisans or hobbyists with a great product and a cool concept. (Their success means) they’re becoming mid(dle) to large size organizations that have typical issues and concerns and challenges that any type of process manufacturing organization would have at that critical size.”

As owner of the Brockway Pub and Danny Boy’s, Paul had a more personal understanding of how Blue Horseshoe technology could help him find business among his big brothers in brewing. “We saw some opportunities where these legacy systems and these old-school business processes were giving way to a younger generation of IT savvy management and executives,” said Paul.

Competition also requires it.  “Fresh, local is obviously the ideal concept,” Paul said. “That’s why craft is taking off.”

The overall United States beer market, according to the Brewers Association, was a $101.5 billion enterprise in 2014.  Craft brewing grew 22 percent or generated $19.6 billion in sales last year.

The association also calculated, with more than 3,000 breweries around the United States that most Americans live within 10 miles of a local brewery.

The association concluded in a 2012 study that the economic impact of craft brewing in Indiana that year was $609,240,000.

With that kind of popularity and that kind of demand, Paul said modern corporate managers don’t want to wait for their business information.  They want their sales figures and projections right now, to help develop their businesses.

As a brewer, he understands the challenges of ordering ingredients and developing beers his customers want but that is not what drives him.

“I’m not a chef and I’m not into, necessarily, brewing beer every day, although it’s fun,” said Paul. “It is the the strategic side of it.”

Paul is eager to see what his system can do to help his clients, and maybe attract others from around the world, from the comfort of Carmel, Ind.