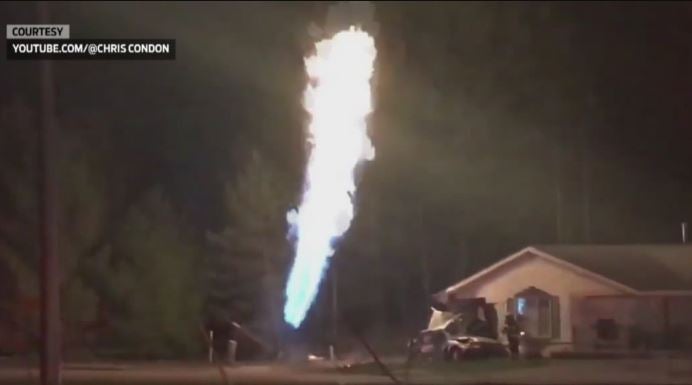 ALEXANDRIA, Ind. (WISH) — A car crash in Alexandria Thursday evening ruptured a gas line, caused flames to shoot into the air for hours and prompted evacuations in the area.

Investigators have since said that the driver, Cody Vaughn, was operating on a suspended license and alcohol is believed to be a factor in the crash. The Madison County Sheriff’s Office said Vaughn has previous convictions for operating while intoxicated.

It happened just before 9 p.m. when a car crashed into a home on West Washington Street near State Road 9, according to Madison County Emergency Management officials.

The crash broke a natural gas line, causing a 40-foot fire ball to spew from the line until around 1 a.m. One-hundred homes within a half mile were evacuated, and power was knocked out to many residents in the area.

Authorities say the vehicle occupants — a man, a woman, a 4-year-old and a 2-year-old — were taken to the hospital with burns and other injuries.

Once day breaks, Vectren crews will go into each home to turn back on gas and re-ignite the pilot light.

No other injuries have been reported.Stay with WISHTV.com for updates.

Alex Update: This is the location of the 8″ gas line which was struck by the vehicle tonight. Note the utility lines on the ground also. pic.twitter.com/HW8E7r4HKL– Madison County EMA (@MadisonCoEMA) April 7, 2017