Crash on I-70 due to suspected distracted driving, police say 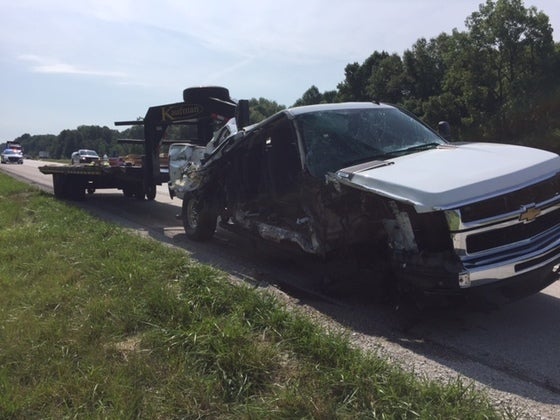 BRAZIL, Ind. (WISH) ­- Indiana State Police and Clay County emergency agencies responded to a crash at 10:30 Wednesday morning in the westbound lanes of Interstate 70 near the 17-mile marker.

The crash site was reduced to one lane of traffic until approximately 2 p.m.

Preliminary investigation showed that a 2008 white Chevrolet pickup truck pulling a trailer loaded with wiring was in the westbound lane of I-70 and traveled off into the emergency shoulder. The truck and trailer struck a disabled and parked semitractor-trailer in the left rear.

Investigators believe that the driver, 22-year-old Jacob Bloom of Lafayette, Ind., crashed due to distraction of using an electronic device. The crash was investigated by state police Master Trooper DuJuan Pressley-McFadden.

There were no injuries reported.

An inspection was conducted on Bloom’s truck and trailer and he was cited for unsafe lane movement, no fuel tax permit and possession of a radar detector in a commercial vehicle.

This crash is among two others reported in Clay County this past week.

On Tuesday, a fatal crash involving two semis and another car occurred on westbound I-70 in western Clay County killing two children. On Friday, one person died in a multiple-vehicle crash on I-70 in eastern Clay County.