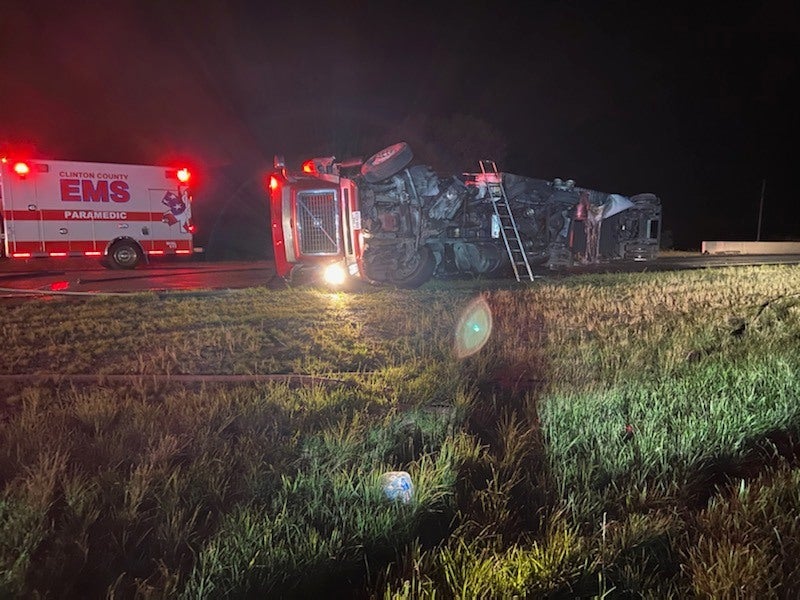 CLINTON COUNTY, Ind. (WISH) – One person was killed in connection to a semi fire on I-65 Monday evening in Clinton County, according to the Perry Township Fire Department.

Just after 11 p.m., crews were called to a semi fire with a possible explosion on I-65 northbound at the 154 mile marker in Clinton County.

After arriving on the scene, a semi on its side and blocking both lanes of traffic, was located. Crews also said the semi had a fire underneath it that was determined to be its cooling unit.

The department says crews were able to get the fire under control within a matter of minutes. While working to extinguish the fire, several onlookers were witnessed trying to sneak behind crews in order to take photos of the incident.

It was then learned that the driver of the semi was using his cellphone at the time of the crash, as he lost control of the truck, hit the guardrail which ripped off the semi’s fuel tank. The fuel tank fell and landed on the road below, resulting in a small explosion, according to the department.

Then, the department says, as crews were clearing up the scene, a driver, who had gotten out of their vehicle to help a tow truck get through, fell off the overpass.

A helicopter was brought in to take the person to the hospital but it was during transportation that the individual went into cardiac arrest and died.