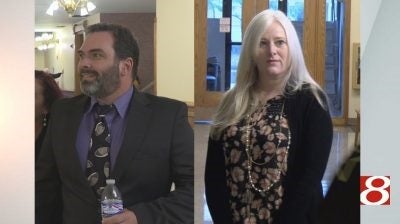 In addition to those called to testify, the state also issued subpoenas for records held by Inside Edition, a nationally televised media outlet. The state said Inside Edition has documents and records that aired on Oct. 9 from Michael Barnett and Kinnard. The court documents said the information was “pertinent to the Tippecanoe County criminal prosecution currently under investigation.”

The Dec. 17 summons would be Natalia Barnett’s first known appearance in Tippecanoe County court. Her adoptive parents, Michael and Kristine Barnett, are accused moving her into a Lafayette apartment and then moving to Canada. She shared her side of the story in November on Dr. Phil.

Current Tippecanoe County Sheriff Bob Goldsmith was a detective on the case and spoke to Natalia Barnett in 2014.

Detective Brandon Davenport is listed as the affiant in the original probable cause, filed Sept. 11.

A gag order was issued on Oct. 28 for the parents from speaking with the media about their adopted daughter’s mental health, physical health or things they claimed happened while she was in their care. Online court records show Natalia was added to the gag order on Nov. 1.

The story came to light in early September when Tippecanoe County Prosecutor Patrick Harrington filed formal charges against Michael and Kristine Barnett. According to court documents, the Barnetts adopted Natalia from Ukraine in June 2010. She has a form of dwarfism called spondyloepiphyseal.

Between 2010 and 2012, the Barnetts had their adopted daughter’s age tested, according to prosecutors. Court documents cite two doctors’ reports from Peyton Manning Children’s Hospital showing her age to be about 8 years old in 2010 and 11 years old in 2012.

However, a doctor’s report from IU Health, provided by Kristine Barnett, said otherwise. The report said the records from Ukraine were “grossly incomplete.”

“The birth certificate that was given to the Barnetts showed a date of birth of 9/4/3. This date is clearly inaccurate,” the report said.

The report goes on to say Natalia had been seen by a dentist and neuropsychologist, both of whom determined she had characteristics of a full-grown adult.

The Barnetts’ son, Jacob, a physics prodigy, was the feature of a “60 Minutes” report in 2012 highlighting the child’s successes. The boy was offered to continue his education at the Perimeter Institute in Canada. The report even appears to show the daughter.

Before they left, prosecutors said the Barnetts had their adopted daughter’s age legally changed from 8 to 22 in June 2012.

The court documents said Kristine told the Natalia to tell others she just “looks young.” In the Dr. Phil interview, Natalia said she complied.

Court documents show the daughter was evicted from the property in May of 2014. A law enforcement source told News 18 that “neighbors took her under their wing.”

It was in September 2014 that the Tippecanoe County Sheriff’s Office was notified and interviewed Natalia A law enforcement source told News 18 they were called by an employee of the Excel Center, a free Indiana public school giving adults a chance to earn an Indiana high school diploma.

An employee said Natalia actually only attended the Excel Center for four days, and she had come from many other schools. Next door neighbor Margaret Axson, said she was friends with Natalia. The two reportedly attended the Lafayette Adult Resource Academy (LARA) together. She said one day, Natalia just stopped coming to class.

Natalia told sheriff’s deputies in 2014 she was abandoned by the Barnett family.

The case went silent until the Tippecanoe County prosecutor filed the two neglect charges on Sept. 11. Affidavits said Michael Barnett was interviewed Sept. 5 and admitted he believed Natalia was a minor in July 2013 when the couple left her in the apartment.

Arrest warrants were issued for the parents. Michael Barnett turned himself in at the Tippecanoe County Jail and posted bond on Sept. 18. Kristine Barnett did the same thing the next day.