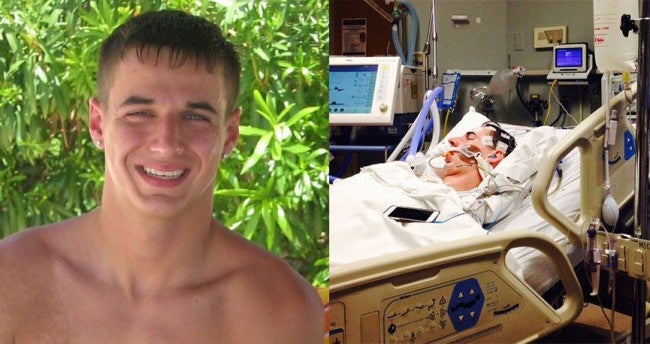 OLDENBURG, Ind. (WISH) – A Bible study teacher is sharing his family’s struggle with heroin in hopes of helping his students.

“I’m sure none of you have tried drugs yet, and the point of this letter is to make sure you never do,” said Todd Brabender, while reading a letter he wrote to his eighth grade students.

“Hopefully from this horrible struggle and this tragedy, I can save just one kid. My goal is to try to make sure they know just how deadly this drug is before they ever try it,” he said

Brabender lost his son, Josh, to a heroin overdose on Jan. 2. The overdose occurred 48 hours earlier. He sat down with 24-Hour News 8 just 11 days after his son’s death.

He said he presented his letter to eighth graders because they’re about to enter high school, and that’s when his son started using.

“As I say in the letter, as an eighth grader he was perfect and innocent and beautiful, just like these eighth graders,” he said.

“It’s sad to know that people would do drugs,” said Colt Meyer, a 14-year-old in the class.

“Heroin wrapped itself around his neck like a python until it eventually strangled the life out of him,” Brabender said to the class.

“I’ll just think of him and his son, and this night and his letter,” said 14-year-old Carlie Werner when asked if she would think twice about using drugs after hearing Brabender’s story.

“I didn’t think it would hit this close (to home),” said 14-year-old Alex Livers.

The class heard of Josh’s cycles of sobriety, followed by relapses, and his stints in jail. But despite his outcome, Brabender says his son was more than an addict.

“He was the funniest guy in the room no matter who was in the room. We just loved being around him. Even through all of his challenges, he just had the biggest heart and the best soul. He just couldn’t overcome the addiction, unfortunately, but he was a wonderful young man,” said Brabender.

Josh was also a father. He has a 1-year-old son and a second child on the way.

“If he would’ve overdosed a year ago, he likely would’ve been alone and in the streets, and thinking he was unloved and unwanted,” said Brabender.

When asked why he chose to talk about what is often referred to as the ‘silent killer’, Brabender said it’s about support.

“I loved my son unconditionally. Everybody that knows me, and loves me, knows about his struggles because it helps to have family and friends give you support. It’s unfortunate that my son passed away. I’m not ashamed of anything. I loved him,” said Brabender.

If you or someone you you know is battling addiction here is a link to resources available.