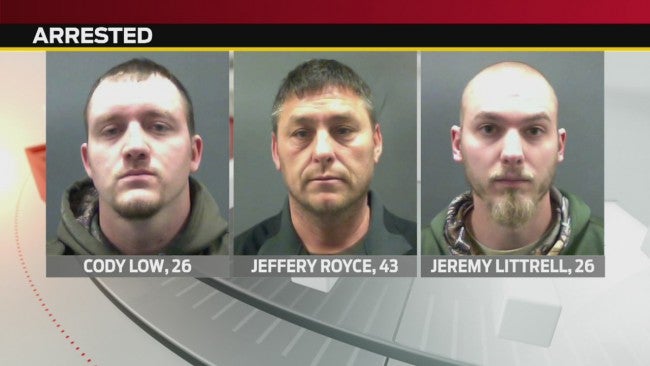 JENNINGS COUNTY, Ind. (WISH) – A Jennings County deputy and two other men were arrested Wednesday in connection to a fight near Butlerville last year.

Indiana State Police say the investigation began on Aug. 8, 2015 when authorities were asked to investigate an apparent battery that happened at the Butlerville Grocery Store. It happened during a memorial motorcycle ride.

A short time later, police say Low and Littrell apparently heard about the earlier incident, confronted Earl and battered him.

According to police, Earl is said to have suffered injuries in both altercations.

Because Low is a deputy, the case was turned over to a special prosecutor. Charges were then filed against Low, Royse, and Littrell. All three turned themselves in after the warrants were issued.

Low, Royse, and Littrell bonded out of the Jennings County Jail and will soon appear in court.