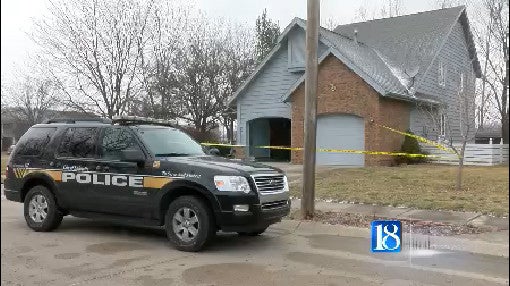 LAFAYETTE, Ind. (WLFI) – A Lafayette man in his 80s was beaten, tied up and had his car stolen on the south side Monday afternoon.

Police say the suspect is Jacob McDaniel, a 20-year-old man, and the victim was a man he lived with, 86-year-old Kenneth Nice.

Neighbor Dustin Elliott said McDaniel stole his car last year. But he can’t believe something like this happened to Nice, his neighbor, who he would often see doing yard work in the summer.

“I’ve never really talked to him, but whenever I’d drive by, he’d give me a wave,” said Elliott.

But Nice’s house, in the 900 block of Brick ‘N’ Wood Drive, near Ninth Street and Twyckenham Boulevard, was surrounded by crime scene tape Monday afternoon on Lafayette’s south side.

“Crazy because it’s a really quiet neighborhood,” said Elliott. “There’s a lot of teachers and a lot of older folks that live around here. To hear something like that seven houses down from me is pretty unreal.”

Police arrested Jacob McDaniel less than two hours after they were notified, on the north side of town, near Sixth and Union streets. They reported McDaniel was in the stolen car.

Elliott said he had his own incident last fall with McDaniel, when he accidentally left his keys in his ignition while it was in his driveway after a late night of school. His car was stolen, and he says he saw McDaniel driving it the next day. He got his car back, but says the charges were later dropped.

“It was last September,” said Elliott. “His name was Jacob McDaniel.”

McDaniel was arrested after residents on Regal Valley Drive say they saw him steal six packages from an empty home’s front porch, eventually leading to a chase.

But for Elliott, Monday’s incident is eye-opening that something this serious happened just seven houses away.

“I just don’t understand how you could do something like that,” said Elliott.

Police have released few details in this case and were not available for an interview Monday night.

McDaniel was booked into the Tippecanoe County Jail on seven preliminary charges including aggravated battery, criminal confinement and auto theft.