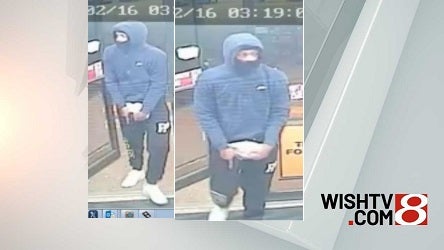 GREENWOOD, Ind. (WISH) – Police in Greenwood are looking into an armed gas station robbery and beating.

According to the Greenwood Police Department, officers responded to the Village Pantry in the 800 block of East Main Street on February 16 for an armed robbery.

After arriving on the scene, officers learned that the cashier was beaten in the head with a gun by the suspect which led to considerable blood loss. The cashier was transported to the hospital for treatment.

The suspect is described as a black male who is 6′ tall with a slender build.

Police also said the suspect was driving a sedan with chrome wheels.

Anyone with information on this case should contact Crime Stoppers at 317-262-8477.