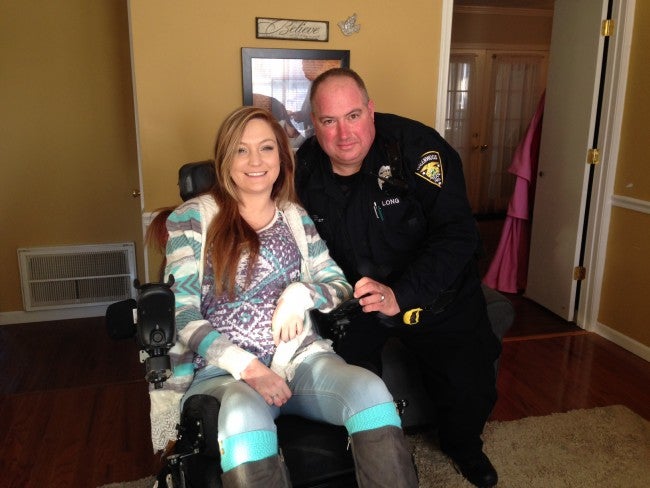 Now, Jazzmin Brown spreads her message to others about the harsh realities and consequences of drugs and addiction.

It was nearly three years ago when 24-Hour News 8 first introduced you to Jazzmin.

It was a recent Facebook post that made us decide to check in with her again: a post with the Greenwood police officer who was the first to respond to her mother’s emergency call for help after discovering Jazzmin had overdosed on heroin and Xanax at their Greenwood home.

Officer Bryan Long responded to a call of an “unresponsive female.”

It’s a call he will never forget.

“When I got there, I went in the house, and she was laying on the couch, her mom was doing CPR, frantic. I took over for her,” said Long.

Long says he did CPR until paramedics arrived. He says they told him as they took Jazzmin into the ambulance that the prognosis wasn’t good.

“It was one of the scariest times of my career. I knew (Jazzmin) already, and I knew she was young, about the same age as my daughter. All the images went through my mind: that could be (my daughter). I just did what I had to do, and thank God it worked,” added Long.

Long had met Jazzmin a couple previous times when she got in trouble as a juvenile.

“I heard the next day she had made it, and I was really delighted,” Long said. “It was probably the highlight of my career, to be honest with you.”

Jazzmin survived. She was without a heartbeat for more than 30 minutes, and she was left paralyzed from a spinal stroke. She suffered short term memory loss and a slight brain injury.

Since then, Jazzmin and her mother have worked to not only document Jazzmin’s Journey on Facebook and YouTube, but to make sure to spread the message by speaking at schools and recovery events.

“I thought this wouldn’t happen to me. I’m lucky; nothing bad is going to happen. But it doesn’t exclude anybody. Anything can happen to anybody,” said Jazzmin. “If I kept doing drugs, I would have died. If I didn’t, I would have probably ended up in prison.”

Jazzmin says she works to stay positive. She’s especially grateful for what she has and who helped her get to where she is now.

Officer Long and Jazzmin got together recently at her Greenwood home.

“I couldn’t thank you enough,” Jazzmin told him.

They both share a message they’d like all people to know. They say drug use affects everyone in a community: your family, your friends, the first responders who see this on a daily basis. They hope anyone considering drug use – will consider the consequences first.

“I just hope the message is, that they’ll think twice about trying any type of illegal drug. They have a whole life ahead of them, and they don’t want to chance it,” said Long. “Luckily Jazzmin gets to live, but I’ve seen it go both ways. I hope I don’t have to see anybody else go through this.”