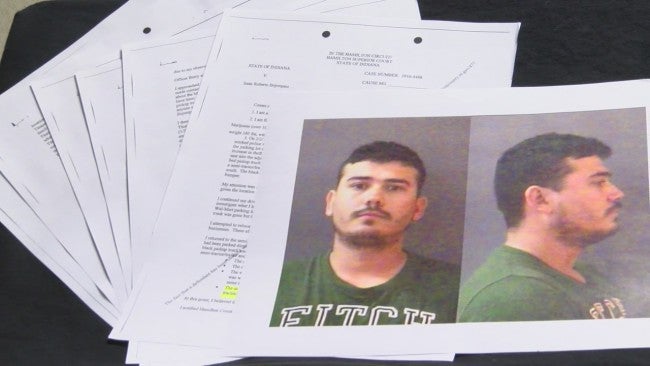 A man from Mexico is charged with dealing and possession of marijuana.

Fishers police made a massive bust Tuesday morning after finding more than 500 pounds of marijuana hidden in a semi headed for Anderson.

Issac Bojorquez, 28, told police he was hoping to make some quick cash. Police said he agreed to haul the drugs thinking he would get $10,000 once he was done.

Bojorquez is sitting in the Hamilton County Jail. Police said he and another man had been traveling in a semi from California. Both pulled into the parking lot on East 96th Street.

According to court documents, an officer noticed something suspicious from afar. He saw a black flatbed pick truck parked bumper to bumper to the semi.

Once he pulled over to check, the truck was already gone. The officer then noticed the cargo doors were slightly open. He thought someone broke into the truck, but that wasn’t the case.

“What happened in Fishers was excellent, it was a very large marijuana investigation,” said Sgt. Leonard, Indiana State Police. “The officer did a great job being proactive.”

In the Fishers bust, police seized more than 500 pounds of marijuana, but also spotted a lot of red flags.

According to court documents, police found a United States Navy Magnet and a religious card in the overhead compartment.

“They’ll put those on a vehicle so if they do get stopped or as it’s going by or sitting in a parking lot, when an officer sees it they’re hoping, they’ll think it’s a good person,” said Sgt. Leonard. “Look at that, they support the police, look their religious, they wouldn’t be involved in any criminal activity.”

Last year Indiana State Police had a record breaking year in seizures. ISP seized 82 pounds of heroin, 105 pounds of meth, 2,000 pounds of marijuana and around 7.8 million dollars in drug money.

Sgt. Leonard said most of these drugs were found moving along the interstate.

“When it’s in transit that’s when it’s most vulnerable to law enforcement and to other organizations that would like to take it from them,” said Sgt. Leonard.

ISP is retraining all troopers to look for drug and criminal factors before it happens.

Fishers police said this is their biggest bust to date. Last year the department seized around 100 pounds of marijuana.