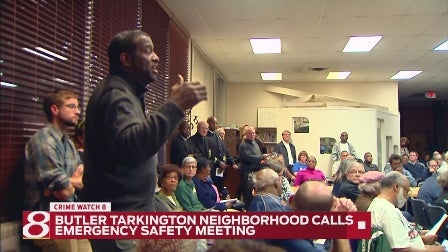 INDIANAPOLIS (WISH) – People living in the Butler-Tarkington neighborhood are searching for answers after recent violent crimes in their neighborhood.

The meeting happened almost a week after a 19-year-old man was shot and killed in the 4100 block of Bryam Avenue.

His death marks the fourth homicide for that neighborhood in a time span of about two months.

The lobby of the Martin Luther King Community Center was packed Monday night.

Many residents voiced their concerns about safety to the Indianapolis Metropolitan Police Department.

“I remember the way we dealt with getting rid of crime, you gotta go after the landlords,” said one resident.

“What I’m saying is these parents, you have young parents having babies they let their children run wild,” said another resident.

IMPD Police Chief Rick Hite stood before a crowd of more than 100 people addressing their frustrations, talking about enforcement and encouraging residents to speak up if they know anything about a case.

“I’m not trying to indict anyone tonight or call anyone out, but let’s be clear about this, if you harbor aid and abet then you are part of the crime,” said Hite.

Many residents agreed change needs to happen in the Butler-Tarkington neighborhood to stop the violence.

One person threw out ideas for community programs and initiatives. “If I ain’t got nowhere to go play, I’m going to play in the streets,” said one resident.

Police say it was just last week when Malik Perry was shot and killed in the 4100 block of Bryam Avenue.

Police are still investigating that homicide, including the case of of Clarence “Wade “Havvard.

The city confirmed he was a public works employee.

“This is all his spirit you know, his spirit is telling me to do this you know? We got to stay with God and part of this movement we’re not going to stop. We’re going to keep going until the city and our community are safe,” said Damon Lee.

While the investigation continues on the north district to find closure for the victim’s families, the IMPD commander said everyone is in this together.

“Butler-Tarkington, Geist, we’re all in this together. What happens here affects me where I live and it affects other people all around this county and city,” said commander Chris Bailey.

Since the beginning of Oct. police in the north district have teamed up with state police to do extra patrolling.

The next Butler-Tarkington Neighborhood Association meeting is scheduled for November 9 at the Martin Luther King Community Center.