No explosives, no international terrorism signs found in Dallas after 5 slayings 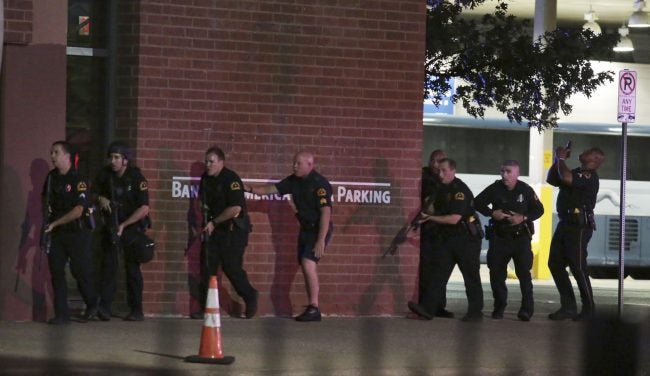 DALLAS (AP) – Dallas police say no explosives have been found in extensive sweeps of downtown areas following the fatal shooting of five police officers and the wounding of six others by snipers.

The gunfire happened during protests over this week’s fatal police shootings in Louisiana and Minnesota of two black men. Police have detained at least three people in the investigation of the Dallas shootings.

Police said a fourth suspect was engaged in a standoff with authorities and had made threats about bombs.

Investigators say there are no indications of a connection to international terrorist groups, according to three law enforcement officials who spoke on the condition of anonymity. It’s still early in the investigation, the sources noted, but it’s one of the first things investigators look for.

The gunfire claimed the lives of four Dallas police officers and one Dallas Area Rapid Transit officer. DART serves Dallas and a dozen other North Texas cities. The transit agency operates buses and the state’s largest municipal rail system.CNN contributed to this story.