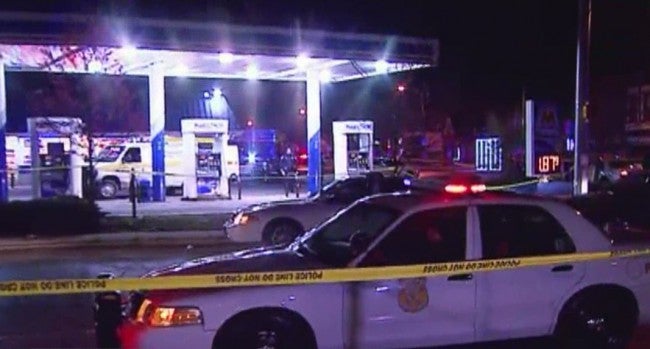 INDIANAPOLIS (WISH) — An Indianapolis police officer fatally shot a man on the near east side of the city Tuesday evening, an IMPD official said.

It happened in the parking lot of a gas station at 10th Street and Rural Street around 9 p.m.

According to IMPD Deputy Chief Valrie Cunningham, a woman drove her car right up to an officer’s squad car on the corner of 10th and Rural.

The woman told the officer that her husband, who was seated in the passenger seat, had been hitting her.

Video taken from the gas station shows the officer talking to the woman’s husband 44-year-old Kevin Hicks according to police.

Cunningham adds this appears to be routine, and it seems the officer tries to get Hicks to step away from the vehicle by touching him.

This move ignited a fist fight between Hicks and the officer. Police say witnesses say the officer took out his taser, Hicks knocked it out of the six year veteran’s hand.

The fight continued, out of frame of the cameras. The officer fired a shot, striking and killing Hicks.

“This occurred right on the corner in the neighborhood it’s very important to report accurately,” said Cunningham.

24-Hour News 8 is learning that Hicks had a warrant for his arrest for a parole violation.

“Kevin didn’t have no kind of weapon,whatsoever, either this officer was too scared and drew a weapon on him,” said Hick’s uncle who wished to remain nameless.

Investigators believe Hicks was AWOL from Duvall Residential Center, and police believe that may have led to the physical between he and his wife.

Marion County Prosecutors Office has decided not to release the video, because it is currently an open investigation.

The officer was transported to the hospital for slight injuries.