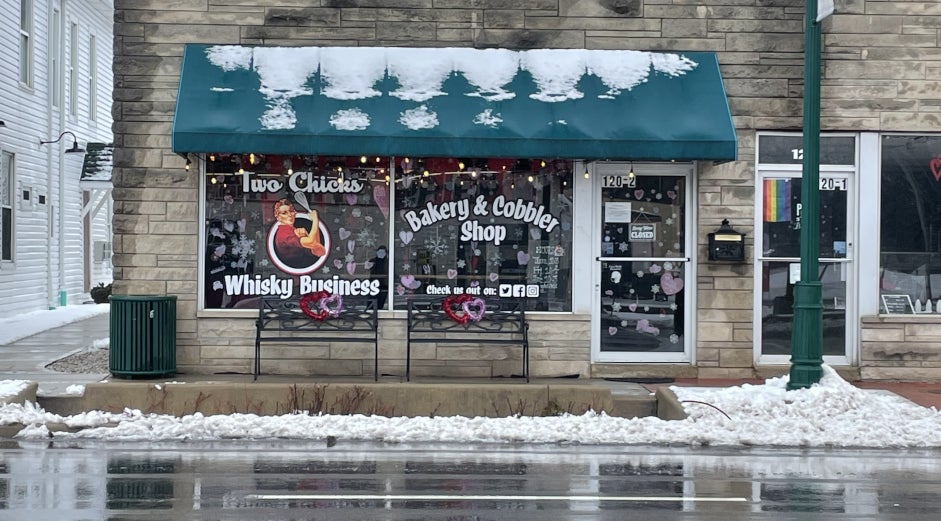 PLAINFIELD, Ind. (WISH) — The owners and employees of a downtown Plainfield bakery and cobbler shop fought off a robber Saturday by throwing food and other objects at him, police said Sunday.

A 25-year-old Plainfield man is in jail after being preliminarily charged with criminal confinement and robbery. Matthew Marshall, wearing a ski mask and gray pants, entered Two Chicks Whisky Business about 1 p.m. Saturday, according to a news release from Deputy Chief Joe Aldridge of Plainfield Police Department. Marshall locked the door after entering and then grabbed his hip as if he had a firearm, employees told an officer who responded to the reported robbery.

The food and objects thrown at Marshall prompted him to leave, the release said.

A witness shared with police a photo of Marshall fleeing the store. The photo showed him wearing “district footwear” that matched Marshall’s, police said.

“It is believed that the loss was minimal to the business from a tip jar,” the release said.

The restaurant, 104 E. Main St., is open Thursdays through Saturdays. It closed early Saturday after the robbery. Its goods include cupcakes, pie, cheesecake, cookies, cake, brownies and cookie dough.

The restaurant posted a massage on Facebook after the robbery: “Update: There was an attempted robbery at our shop this afternoon. It was absolutely terrifying. Paige, myself and our daughter Shylah are physically ok but to be honest ..emotionally we are a wreck. Thank you to our customers, neighbors, friends and Plainfield Police Department for helping us this afternoon. To the lady who stopped her car and took our daughter to calm her down once we got out..we are forever grateful. We might be broken but through the grace of God we will come back stronger.

The restaurant posted a second message on Facebook on Sunday: “As news stories are pouring in about what happened yesterday in our bakery, Paige and I want to be very clear, this isn’t about throwing food at a guy who wanted a tip jar. The picture you are looking at is the end result of a man with a violent history who rushed in our bakery and headed toward our 19 yr old daughter. When the suspect locked our door we feared for our lives and we fought like hell to protect our daughter and work our way to the access door leading to Paw Street Bakery. We just wanted out. Our store was trashed in the process but all of this can be replaced. We feel blessed and loved by all of you. We are trying to catch our breath and heal from this trauma. Our lives are forever changed by this. We don’t know what our future holds; however we are trying to figure it out. We wanted our customers to hear directly from us versus several versions that are being passed around.