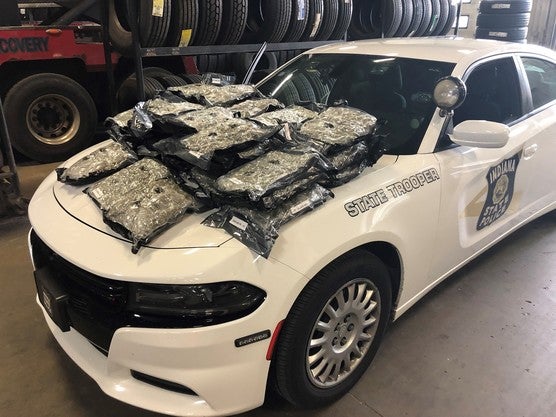 HENRY COUNTY, Ind. (WISH) – A traffic stop Tuesday evening led to the discovery of 34 pounds of suspected marijuana and the arrest of a Minnesota woman.

An Indiana State Police trooper pulled over a Dodge Challenger on Interstate 70 eastbound near the 132 mile marker just before 6:30 p.m. for following the vehicle in front of it too close. During the stop, the trooper noted that the driver seemed unusually nervous, so he called for assistance.

A Cambridge City Police officer and his K-9 partner responded to the scene, where the K-9 alerted authorities to the presence of contraband in the vehicle. Further investigation turned up 34 individual packages of suspected marijuana, each weighing approximately one pound, with a street value of $70,000 according to ISP.