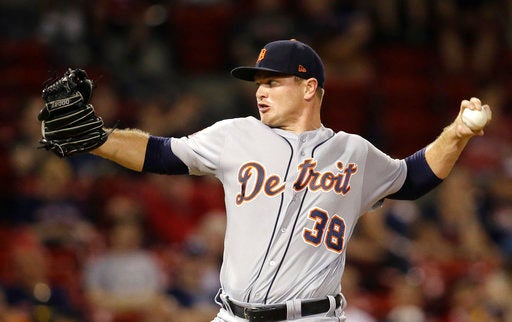 CHICAGO (AP) – The rolling Chicago Cubs got a big lift Monday when they acquired reliever Justin Wilson and catcher Alex Avila in a trade with Detroit, bolstering their chance for another long playoff run.

The addition of Wilson gives manager Joe Maddon another late-inning option in front of All-Star closer Wade Davis. The defending World Series champions had been searching for a veteran to back up catcher Willson Contreras since they cut Miguel Montero a month ago, and Avila is having one of the best seasons of his career at the plate.

Tigers general manager Al Avila traded away his son, but his club received minor league infielders Jeimer Candelario and Isaac Paredes and a player to be named or cash.

“Really, it’s no different than the rest of the guys. Last week with J.D. (Martinez), you have the same emotional feelings,” Al Avila said in New York before the Tigers played the Yankees. “Obviously you think, well, he’s your son so you probably feel even worse. Not really. Nobody likes to go through trades.

“Actually, the person that’s going to be really worse off, it’s not so much my wife, it’s my mom – Alex’s grandmother. She’s the one that might be the most angry,” he added.

The 23-year-old Candelario was considered one of Chicago’s top prospects, but he was blocked at the major league level by NL MVP Kris Bryant and first baseman Anthony Rizzo.

Just three weeks ago, the Cubs hit the All-Star break with a 43-45 record after an embarrassing 14-3 loss to Pittsburgh at Wrigley Field. They trailed Milwaukee by 5 1/2 games in the NL Central, and there was no sign of a turnaround on the horizon.

But then Chicago got left-hander Jose Quintana in a blockbuster trade with the crosstown White Sox on July 13, and took off from there. The Cubs won two of three in Milwaukee over the weekend to improve to 13-3 since the break and open a 2 1/2-game lead over the Brewers in the division. St. Louis was 4 1/2 back, with Pittsburgh 5 1/2 behind Chicago.

“The second half, we’ve played really well,” general manager Jed Hoyer said. “But we’ve got three teams we have to hold off to win our division, and that’s our focus is. A team that was two games under .500 two weeks ago can’t be looking ahead. We’ve got to take care of business in our division. That’s where all of our focus is now.”

While Chicago has benefited from solid relief all season, the acquisition of Wilson will lessen the load on primary setup men Carl Edwards Jr., Koji Uehara, Hector Rondon and Pedro Strop. It also puts a third left-hander in the bullpen alongside Mike Montgomery and Brian Duensing.

“I think it really takes a burden off of a bunch of different guys, which I think is really helpful for Joe,” Hoyer said.

Wilson, who turns 30 on Aug. 18, is 3-4 with 13 saves and a 2.68 ERA in 42 appearances in 2017. He also is under contractual control through next year, an important consideration for the Cubs since Davis, Uehara and Duensing are eligible for free agency after this season.

Alex Avila returns to Chicago after he played for the White Sox last year. The 30-year-old catcher is batting .274 with 11 homers and 32 RBIs in 77 games.

Contreras is the middle of a breakout season and Victor Caratini hit a tiebreaking homer in the seventh inning of Sunday’s 4-2 win at Milwaukee. But Caratini has just 26 major league at-bats, leaving the Cubs on the lookout for a veteran backstop to help keep Contreras fresh.

“Willson plays like the Energizer Bunny,” Hoyer said. “I think we all know that. Everyone has their limits, and I do think we have to be very careful not to wear him down, to make sure he’s still fresh during the pennant race. We risked him playing too much without going out and making moves like this.”

Right-hander Dylan Floro was designated for assignment to create a spot on Chicago’s 40-man roster. The Cubs will have to make two more moves to add Wilson and Avila to their active roster before Tuesday night’s series opener against Arizona.

The Tigers are fourth in the AL Central, making them sellers at the non-waiver deadline. They traded Martinez, a power-hitting outfielder, to Arizona for three prospects on July 18.

“We had evaluated our own system and felt that there was a void in the minor league system of position players,” Al Avila said. “So we really set out to refill this organization with position players. And really our main focus was, the best talent available to bring in.”

Tigers manager Brad Ausmus said right-hander Shane Greene will take over the closer role, and Hicks will share time with James McCann behind the plate.

“It’s the business of baseball. That’s all it is,” Ausmus said. “The trade deadline forces teams to decide whether they’re in or out, and that’s when the action happens. The players unfortunately become assets and when you have value in them, this is the time of year when you try to get something in return.”

Candelario, who made his major league debut last season, hit .152 with a homer and three RBIs in 11 games with the Cubs this year. The switch-hitting third baseman batted .266 with 12 homers and 52 RBIs in 81 games with Triple-A Iowa.