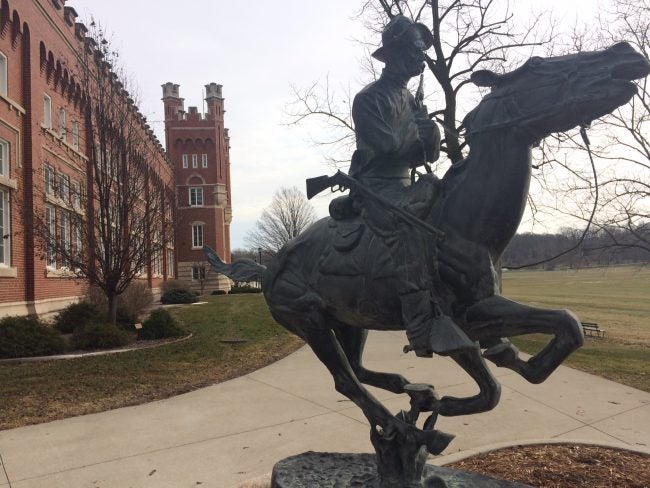 Students at the Culver Academies prepare their mounts for a ride into history: The school’s 17th performance in an Inaugural Parade.

Karinna Kanach, from Carmel, cannot shake off her smile.

“I’m so excited,” she tells us more than once.

Kanach says her whole life has pointed to this parade. She was born three days before George W. Bush took office.

“My dad has pictures of the Inaugural when I was a baby,” she explains. “And 16 years later their baby is all grown up and she gets to actually ride in an Inaugural, and I think it’s just the coolest symmetry to my story and I’m really excited to go.”

Kanach is part of the Equestriennes: 24 cadets from the Culver Girls Academy. They’ll ride alongside 56 boys from the famed Black Horse Troop. The team’s first Inauguration Day appearance was 1913 escorting Thomas Marshall, who, like Mike Pence, was a former Indiana Governor-turned-Vice President.

Since then, Culver riders have performed for the swearing-in ceremonies of Democrats and Republicans heading to the White House.

For the Trump/Pence Inauguration, the “official” invitation came in December – confirming what the students had long hoped.

“It is an expectation,” says Black Horse Troop member Sean Kim, also from Carmel. “We even started practicing before we were told we going. It’s something everyone really looks forward to.”

“These horses aren’t like cars. They don’t really work all the same. It’s something you have to learn through practice,” Kim said.

Troop member Jerry Jin, another Carmel-based cadet, agrees. He says the team works, “to make sure that if we have any problems and horses get spooked, we keep it low and we bounce back from it.”

Mark Waller is the Director of Instruction. He wants the time cadets spend with the horses to be training for life.

Waller says the response to the invitation to perform has been very positive, but he also answered concerns of critics, including some Culver alums, who say the teams should have declined the opportunity.

“We are going to this parade to honor the position of the President of the United States. So (as a team), politics don’t come into it all,” Waller explained. “Politics as far as I’m (personally) concerned, I’m a former police officer and have dealt with a lot of political events in London. The only concern I have is if there’s anyone out there for political reasons want to disrupt that parade and put my kids, my staff and my horses in some form of jeopardy.”

For more about the Black Horse Troop and Equestriennes, click links above.  You can also click here to learn more about Culver.