Cummins VP reflects on a life lived at full throttle 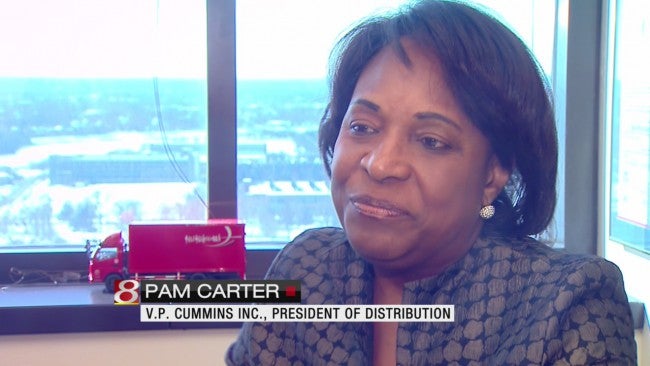 INDIANAPOLIS (WISH) – Pam Carter is a woman whose life is full of firsts. She’s spent her career breaking barriers not only here in Indiana, but across the country.

If you ask her why she does it she’ll say family. For this vice president, attorney and international bridge builder, family is where her story begins and ends.

“My grandfather had a really wonderful career, ” said Carter. “He studied law. He wasn’t able to practice because of the color of his skin at that time so he became a minister. He inspired all of us because he never let barriers stand in his way.”

She was just 14 when she became actively engaged in the civil rights movement and she remembers marching with Dr. King in Chicago, Illinois.

“I was young, I was in high school,” remembers Carter. “I remember when they started throwing rocks, and people on the sides of the streets with a lot of hateful posters and when they started throwing rocks, I was terrified, I remember that. And then at some point, when I was marching I was no longer terrified. I was fearless, and I remember that moment. I thought this is my country as well, we’ve paid our dues, I’m a free citizen and I want to fight for our rights.”

She is the president of global distribution. She’s lived or worked in Africa, China, India and Belgium all while establishing the brand of one of Indiana’s largest companies around the world.

Accomplishments for which she won’t take credit.

“I would say humbly that my achievements are the pinnacle of success for a whole group of people who helped to make me who I am,” said Carter. “(People) who invested in me and took risks with me. And when I did falter or fail, and everyone falters and fails, you just get up and learn the lessons and move on. I think it’s much more of an ordinary than an extraordinary journey, but it’s one of persistence and not ever giving up. I’m not particularly ambitious actually, I just want to live life full throttle. Live it so that the impact that I have is meaningful to people, and that actually what I leave is a personal touch of caring and also being accountable to this country and the world, in a way that I know that I am a responsible and hopefully decent human being, nothing more and nothing less.”

Carter is just a few weeks from retiring from Cummins.

She says she’s most looking forward to spending time with her family. She is a new grandma.

And she says she’ll be looking for new ways to make an impact.