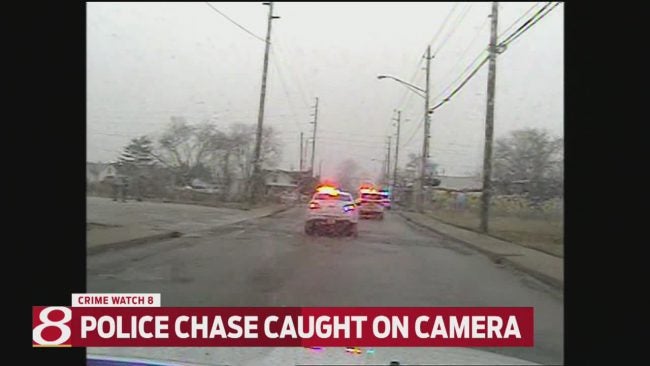 EDINBURGH, Ind (WISH) — Dash cam video of a high speed chase ends with the suspect going airborne and crashing into another driver. Police identified the man behind the wheel as Gary Ewing. Ewing is now behind bars at the Bartholomew County Jail.

Police say it started in Edinburgh, where Ewing robbed Main Source Bank near I-65. Workers at the bank were able to get a description of the car Ewing drove and his license plate number. Johnson County Sheriff deputies waited for him to pass by on I-65, in Franklin. Deputies tried to pull him over near the Franklin exit and that’s when the chase ensued.

110 mph is how fast police say they were going. Ewing, they say, was going faster. Dash cam video shows the red Camaro he drove getting onto I-65 in Franklin, making his way about 25 miles north to Indianapolis.

“They go by him so fast that it looked like he was going backwards. I’d say yes, he was going pretty fast,” said one witness who did not want to identify himself.

It’s not long before you see several officers join in the chase. Officers from at least six different agencies, including IMPD and State Police assisted. The conditions weren’t favorable for drivers; fog, rain and afternoon traffic. But, not even stop sticks could stop him.

“I watch Cops on TV all the time and I see this all the time. People trying to get away from them,” said the witness.

But this was no TV show. With officers hot on his tail, the suspect gets off on Raymond Street on the city’s south side and heads up Shelby Street a few miles away. Police say when Ewing drove over the railroad tracks he went airborne, smashing into another driver.

“We thought transformers blew up that’s how loud it was,” said the witness. He continued, “Knocked the car plum over there in the lot and that knocked a guy plum out of the car. He was on the ground and the other guy that hit him, they had him in handcuffs.”

You can see the victim’s black car in the distance. Finally, it was over. Police circled around the suspect.

“Going that fast and going airborne, hitting a car and knocking it plum off in the street into a lot, I was surprised that there wasn’t more serious injuries then what there was,” he said.

According to police both Ewing and the other driver were taken to Sidney & Lois Eskenazi Hospital with non life threatening injuries. Ewing now faces charges for both the bank robbery and police chase.