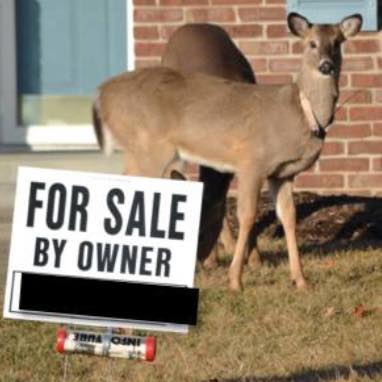 BLOOMINGTON, Ind. (WISH) — Are herds of urban deer taking over Bloomington? A new study shows that might be exactly what’s happening and it comes from Ball State in Muncie.

But according to Carter, Bloomington does, and that number is growing, especially in the city limits.

And that’s why some residents have installed fencing around their gardens, but not everyone minds having deer in town.

“I have to shoo them off my drive way sometimes when i want to get into the garage, but it’s not a problem for me,” one resident said.

But others said it’s a safety issue.

“Our dog has had a few run-ins with the deer. He’s been kicked a few times by the deer and certainly I think it can be a traffic hazard especially in the evening. When you’re driving through a community that you’re not used to having deer, it is troublesome and I have one child that did have a collision with a deer,” Tina Peterson, of Bloomington, said.

So Professor Carter and his team of researchers are putting GPS tracking devices on the deer.

“They’re not in any pain at all throughout the work up process,” researcher Garrett Clevinger said.

And then from his office in Muncie, Professor Carter can see exactly where the deer are at all times.

The study has been going on since 2013 and won’t wrap up for a couple more years.

“Then the city and the citizens can take those facts and decide what they want to do and how they want to manage their deer,” Carter added.

Back in 2012, a deer task force was put together to come up with ways to shrink the deer population in Bloomington but nothing ever came of it.

And currently there is no known plan to stop the deer population from growing.