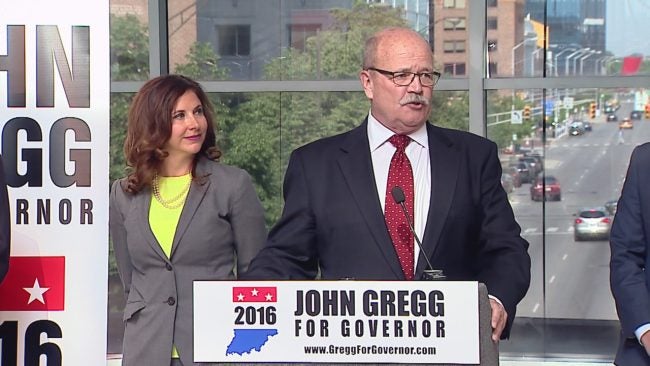 Gregg said Wednesday morning that he picked Hale because she is a consensus builder who works across the political aisle. She is an Indianapolis Democrat.

Hale is a former Kiwanis International executive who was first elected to the Indiana House in 2012, defeating a longtime Republican incumbent in a district on the north side of Indianapolis.

She can be expected to help the Gregg ticket win votes in Marion County.

That’s another potential key to victory for the Democratic candidate.

She has been a vocal advocate for victims of sexual assault and domestic abuse during her time in the Legislature.

Gregg’s selection of Hale comes as a surprise to no one because women voters could be a key to the outcome in the race for governor.

Hale is a second term state Representative from a district on the northeast side of Indianapolis who considered running for the U.S. Senate this year.

“In Representative Hale I have found a full partner who’s not only ready to govern,” said Gregg, “but who has the experience and the passion, the desire to help me refocus Indiana’s state government on the things that really matter to Hoosiers.”

“I’ve always learned that no matter what happens in life you have to keep moving forward,” said Hale, “and I’ve learned the value of hard work. I bring this up because that’s what Hoosiers need to do. When Indiana elects John Gregg our next governor we’re gonna double down and get to work.”

Hale, who is now married, says she worked her way through college after becoming a single mother at age 19.

Republican Gov. Mike Pence and Gregg are heading into a rematch of their 2012 campaign, which Pence narrowly won.

Indiana Republicans say they’re ready to debate the health of the state’s economy now that the Democratic gubernatorial ticket is set.

“Congratulations to Rep. Christina Hale on her selection to join the Democrat ticket. We welcome her to the race and look forward to a spirited debate about continuing Indiana’s job growth and soaring economic future.”

Pence says he welcomes Hale to the race and looks forward to a spirited debate about continuing what he calls Indiana’s “soaring economic future.”

State Republican Chairman Jeff Cardwell says there will now be a discussion with “the Clinton/Gregg/Hale ticket regarding Indiana’s continued economic success.”

“With more Hoosiers going to work each morning than ever before, the creation of over 150,000 new private sector jobs, and record capital investment under Governor Mike Pence, Indiana Republicans look forward to beginning the conversation with the Clinton/Gregg/Hale ticket regarding Indiana’s continued economic success. We are also pleased by John Gregg’s decision to name a running mate who has been recognized as a champion for education reform.”