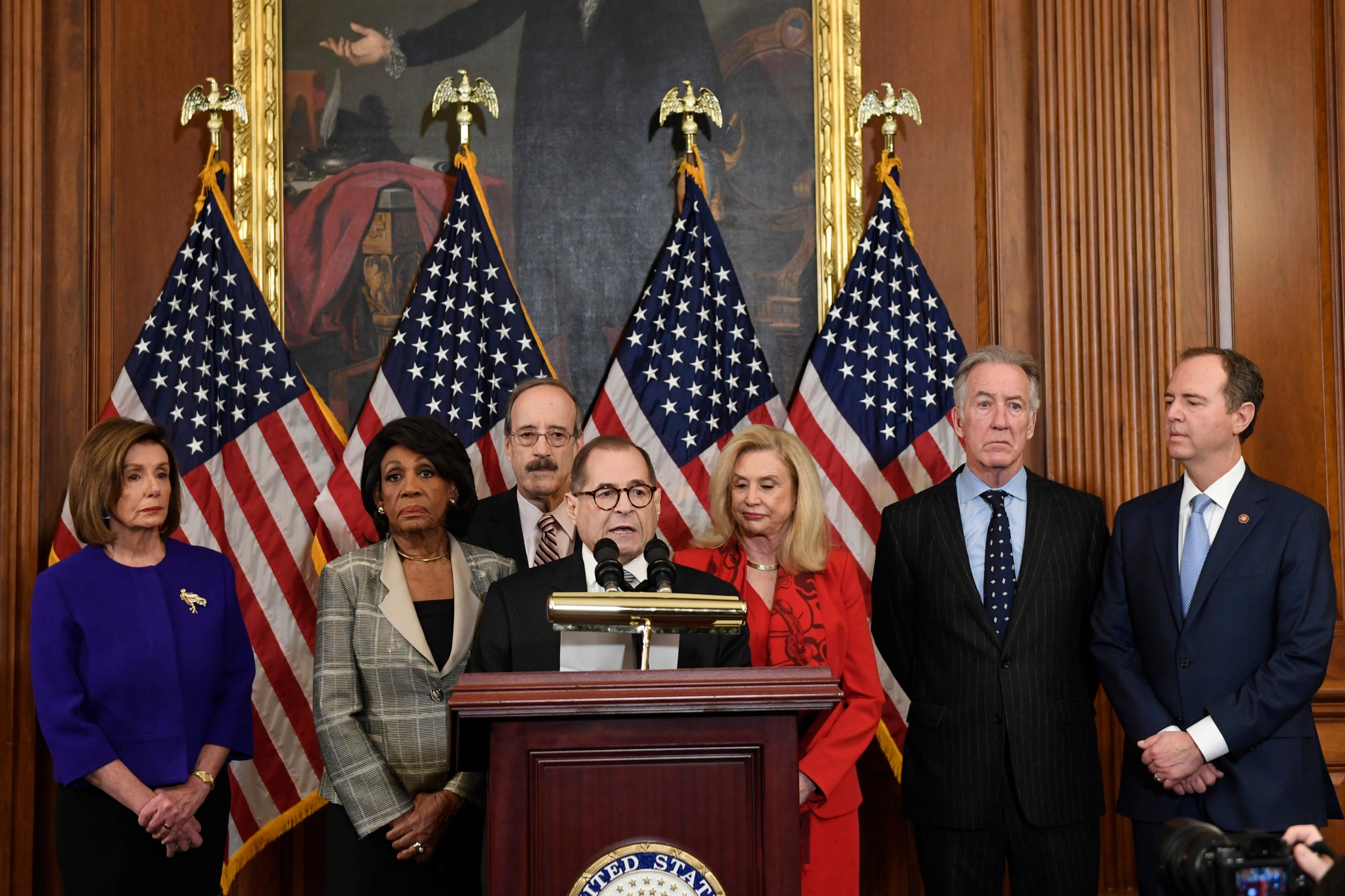 WASHINGTON (AP) — House Democrats announced two articles of impeachment Tuesday against President Donald Trump, declaring he “betrayed the nation” in his actions toward Ukraine as they pushed toward historic proceedings that are certain to help define his presidency and shape the 2020 election.

The specific charges aimed at removing the 45th president of the U.S.: abuse of power and obstruction of Congress.

Speaker Nancy Pelosi, flanked by the chairmen of the impeachment inquiry committees, said somberly at the U.S. Capitol that they were upholding their solemn oath to defend the Constitution. Trump responded angrily on Twitter: “WITCH HUNT!”

Voting is expected in a matter of days by the Judiciary Committee, and by Christmas in the full House. The charges, if approved, would then be sent to the Senate. The Republican majority in the Senate would be unlikely to convict Trump. But first there would be a trial filled with bitter accusations and recriminations just as voters in Iowa and other early presidential primary states begin making their choices.

In the formal articles announced Tuesday, the Democrats said Trump enlisted a foreign power in “corrupting” the U.S. election process and endangered national security by asking Ukraine to investigate his political rivals, including Democrat Joe Biden, while withholding U.S. military aid as leverage. That benefited Russia over the U.S. as America’s ally fought Russian aggression, the Democrats said.

Trump then obstructed Congress by ordering current and former officials to defy House subpoenas for testimony — some testified anyway — and by blocking access to documents, the charges say.

By his conduct, Trump “demonstrated he will remain a threat to national security and the Constitution if allowed to remain in office, ” the nine-page impeachment resolution says.

After decrying the Democrats’ announcement, Trump headed to Pennsylvania for a reelection campaign rally.

First, he tweeted, “To Impeach a President who has proven through results, including producing perhaps the strongest economy in our country’s history, to have one of the most successful presidencies ever, and most importantly, who has done NOTHING wrong, is sheer Political Madness,.”

The outcome, though, appears increasingly set as the House presses ahead toward impeachment as it has only three times in history against U.S. presidents.

In outlining the charges, Democrats said they had no choice but to act because Trump has shown a pattern of behavior that, if left unchecked, poses risks to the democratic process ahead of the 2020 election.

“Our president holds the ultimate public trust. When he betrays that trust and puts himself before country, he endangers the Constitution; he endangers our democracy; he endangers our national security,” said Rep. Jerrold Nadler, D-N.Y., the Judiciary chairman, announcing the charges before a portrait of George Washington. “Our next election is at risk. … That is why we must act now.”

Nadler said, “No one, not even the president, is above the law.”

Chairman Adam Schiff of the Intelligence Committee said, “We stand here today because the president’s abuse of power leaves us with no choice.”

Trump’s allies immediately plunged into the fight that will extend into the new year. White House Press Secretary Stephanie Grisham said Democrats are trying to “overthrow” the administration. Campaign manager Brad Parscale said Democrats are “putting on this political theater because they don’t have a viable candidate for 2020 and they know it.” The president’s son, Eric, embraced his father’s penchant for name calling, assailing Pelosi and “her swamp creatures.”

In drafting the articles of impeachment, Pelosi faced a legal and political challenge of balancing the views of her majority while hitting the Constitution’s bar of “treason, bribery or other high crimes and misdemeanors.”

The final resolution attempted to find common ground by linking the findings in the Ukraine inquiry to the Mueller probe in two lines, without specifically mention the Russia investigation.

As the House chairmen arrived at a closed-door meeting of the chamber’s Democrats after the announcement, they were greeted with applause.

Democratic leaders say Trump put his political interests above those of the nation when he asked Ukraine President Volodymyr Zelenskiy in a July phone call to investigate his rivals, including Democrat Joe Biden, and then withheld $400 million in military aid as the U.S. ally faced an aggressive Russia. They say he then obstructed Congress by stonewalling the House investigation.

The first article, on abuse of power, says Trump “corruptly” solicited Ukraine to investigate his political rivals and required the investigations if the country expected the release of military aide that Congress had already approved as well as a White House meeting with Zelenskiy.

The second article, obstruction of Congress, says that Trump has “directed the unprecedented, categorical and indiscriminate defiance of subpoenas” issued by the House, and that such behavior was “offensive to, and subversive of” the Constitution.

“In the history of the republic, no president has ever ordered the complete defiance of an impeachment inquiry or sought to obstruct and impede so comprehensively the ability of the House of Representatives to investigate ‘high crimes and misdemeanors,’” the second article reads.

Trump insisted in a new tweet that when he asked Ukraine’s president “to do us a favor” with the investigations, “’us’ is a reference to USA, not me!” Democrats, however, say Trump’s meaning could not have been clearer in seeking political dirt on Biden, his possible opponent in the 2020 election.

When asked Monday night if she had enough votes to impeach the Republican president, Pelosi said House member must vote their consciences.

“On an issue like this, we don’t count the votes. People will just make their voices known on it,” Pelosi said at The Wall Street Journal CEO Council.

The next steps are expected to come swiftly after months of investigation into the Ukraine matter, which followed special counsel Mueller’s two-year Russia probe.

In his report, Mueller said he could not determine that Trump’s campaign conspired or coordinated with Russia in the 2016 election. But he said he could not exonerate Trump of obstructing justice and left it for Congress to determine.