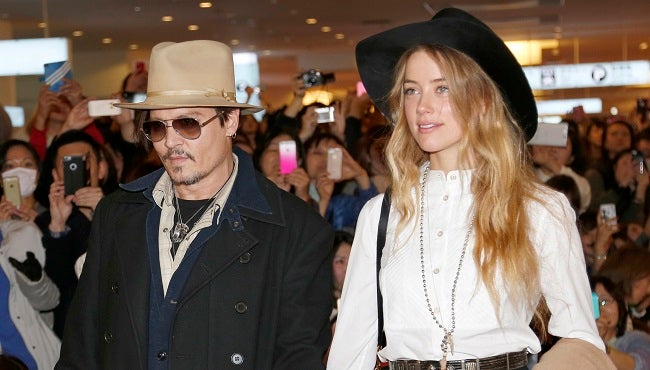 FILE - In this Jan. 26, 2015 file photo, U.S. actor Johnny Depp and Amber Heard arrive at Haneda international airport in Tokyo to promote his latest film "Mortdecai." Australian quarantine authorities have ordered Hollywood star Johnny Depp to fly his pet dogs Pistol and Boo out the country by Saturday or they will be put down. Agriculture Minister Barnaby Joyce on Thursday, May 14, 2015 accused Depp of smuggling the Yorkshire terriers aboard his private jet when he returned to Australia on April 21 to resume filming of the 5th instalment in the "Pirates of the Caribbean" movie series at Gold Coast studios. (AP Photo/Shizuo Kambayashi, File)
by: Erica Beringer
Posted: May 27, 2015 / 11:31 AM EST / Updated: May 27, 2015 / 11:31 AM EST

Depp, who currently is in Australia filming “Pirates of the Caribbean: Dead Men Tell No Tales,” did not declare his two Yorkshire terriors, Pistol and Boo, earlier this month, breaking the country’s strict quarantine laws.

According to a report from The Guardian, Depp could face up to 10 years in prison or a fine of up to $340,000. Depp’s pilot also could face prison time for his role in the incident.

Australia has strict processes for bringing animals into the country to limit potential disease exposure to its isolated ecosystem. An Australian Department of Agriculture spokesperson told Buzzfeed: “All animals entering Australia must have an import permit, which is only issued after confirmation that all import requirements have been met. These import requirements, which include rigorous health and biosecurity checks, are essential to ensure pests and diseases from overseas are not brought here. Any animal which is imported without meeting Australia’s import conditions will be ordered into quarantine and will either be exported or euthanized.”

Australian Agriculture Minister Barnaby Joyce made it clear Australia would not tolerate Depp flouting the law.

“If he doesn’t take Boo and Pistol back, we do have to euthanize them,” Joyce told ABC. “Just because he’s Johnny Depp doesn’t make him exempt from Australian laws.”

Depp’s wife, Amber Heard, has returned to California with the dogs.