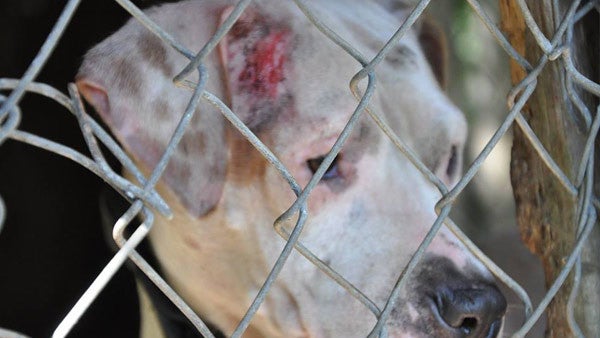 BROOKSVILLE, Fla. (WFLA) – A Brooksville man was arrested and charged with animal cruelty after Hernando County Sheriff’s Office deputies say they discovered 19 adult pit bulls and two puppies living in “deplorable conditions” at a location that appeared to be a dog fight training facility .

The investigation began on October 9, when Hernando County deputies were dispatched to 810 Leonard Street in Brooksville regarding a severely injured dog, in a cage, at this residence.

Upon arrival, deputies and an animal enforcement officer discovered a brown male pit bull in a cage under the house.  The dog was in distress, as he was severely injured and emaciated.  Additionally, there was no food or water in his cage, according to the HCSO.

A deputy contacted with the homeowner, James Harris.  Harris said he had been caring for the dog since October 7 when a friend, “John”  dropped the dog off.  Harris was unable to provide any additional information about John.

Harris allegedly told the deputy that he was aware of the medical condition of the dog; however, he did not seek treatment from a vet nor did he contact law enforcement.  Harris said he fed the dog scraps, but deputies say he was unable to provide proof of any food or water being given to the dog.

Upon close examination by the animal enforcement officer, dog was found to be in very poor condition.

Upon removing him from the cage, the distinct smell of decaying flesh was present.  The dog had injuries to his face and right eye – a white discharge oozing from right eye- and a large open gash was present on his front leg above the knee joint. The dog’s bone, muscles and tendons were visible and a wound was also oozing.  There were many punctures to his other front leg with infection present, according to the HCSO.

Investigators say it was evident that this dog had been used in dog fighting, as a “bait” dog.

An animal enforcement officer took the dog to the Animal Emergency of Hernando so he could be treated by a veterinarian.  The veterinarian said that the dog was most likely a “bait” dog and had been fought within the last few days.

The sheriff’s office said that further investigation found that a dog breeding and a dog fighting training facility could be located at 852 Twigg Street in Brooksville.

Deputies went to the location and say they were greeted by a male wearing a t-shirt that said “No Luv Kennels.”  The male gave deputies permission to look around.

Deputies say they saw 22 adult sized pit bulls and six small puppies. The male who allowed the deputies onto the property said he did not live there or work there, he was just “there” and had the shirt on because he previously bought a dog from there.

The person who deputies were trying to locate was not there.  Deputies obtained a search warrant for the property.

Deputies then went back to 810 Leonard Street and placed James Harris, 62, under arrest for Animal Cruelty. They say he knew about the condition of the dog in his care and failed to provide care.

On October 12, deputies and animal enforcement officers served a search warrant at the 852 Twigg Street address.

Upon arrival, 19 adult dogs and two puppies were located.  Several dogs were chained to very heavy chains, others were caged in makeshift dog cages on the property.  No food was observed and what water was present had algae in it.

The conditions on the property were deplorable, according to investigators.

Additionally, deputies and animal enforcement officers say they found numerous items on the property indicative of a dog fighting training facility, such as:

All dogs were removed from the scene and taken to Hernando County Animal Services where they were immediately evaluated by Dr. Rosenberger.  Once evaluated and treated for any injuries, all dogs were treated for fleas, vaccinated, and fed.

All dog fighting equipment was seized from the property.

Deputies arrested Darryl Smith, charging him with Animal Cruelty and Bait Animals, both felonies.  His bond was set at $4,000.

The case remains under investigation.  Additional charges are pending.