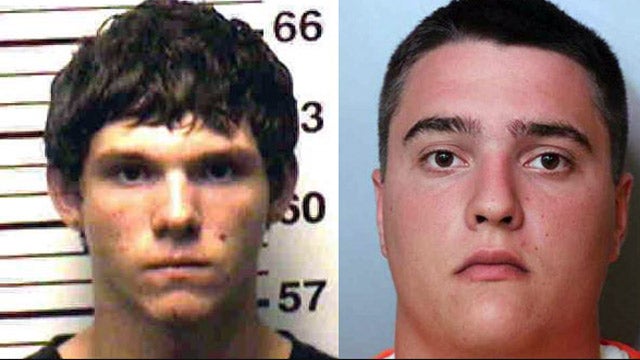 WINTER HAVEN, FL (WFLA) – Two Florida teens are facing first-degree murder charges in connection with the disturbing murder of a man that detectives say happened during a sexual encounter.

Detectives initially believed the fire was caused by a small electric heater, and ruled it accidental.

But, when one of the teens came forward with details about what happened, the fire turned into a murder investigation.

Detectives say Byron Lasiak, 16, of Winter Haven told them that he and Jerry Johnsey, 18, of Auburndale went to Merkley’s home around 4pm on Jan. 10 to have sex with Merkley.

Detectives say that Johnsey told them he put Merkley in a choke hold during the sexual encounter. Merkley passed out and then Johnsey hit him in the head with a baseball bat.

The teens then rummaged through Merkley’s house until they found some gas and poured the gas throughout the home and on Merkley. Johnsey took $2.75 off the kitchen counter as the teens left the home.

Detectives say around 10am the next day, Johnsey returned to the home and went inside. He poured more gas on Merkley’s body and throughout the home. Johnsey then lit a match.

Johnsey told detectives that after he set the fire, he called Lasiak and said, “Don’t worry about it. I just torched the place.”

Johnsey later told detectives that he met Merkley on Craigslist and had planned to rob him while at his house.

Johnsey and Lasiak were charged with first-degree murder, conspiracy to commit robbery and robbery with a weapon. Johnsey also faces an arson charge.

Neighbors of the victim are in shock over the news. “John was a very friendly guy. He was always talking to people and he would go out of his way for others. Then there was the other side of John that we didn’t know, obviously,” Ron Towns said. “Life is more valuable than just to kill someone. It’s a shame the way it ended.”

A family friend of Lasiak says told News Channel 8 that he is innocent. “He’s innocent. We’ve known him for years. He’s not that kind a kid, he was just at the wrong place the wrong time. They are framing him and making him say things that aren’t true” Nicole Rustin said.