Developer backs off of hotel project for old City Hall 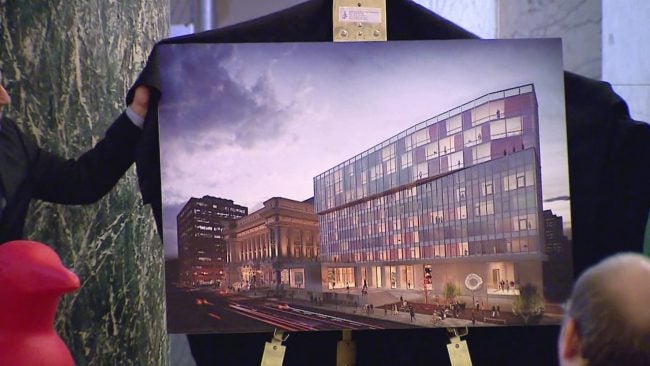 INDIANAPOLIS (WISH) –The plan was to transform the old City Hall building into a boutique hotel. Now the project’s developers are backing off and city leaders are looking for a new plan.

21c Museum Hotels released a statement saying the city and the company “have been unable to reach business terms that make a 21c Museum Hotel project feasible at this site.”

Craig Greenberg, President of 21c Museum Hotels, won’t disclose the numbers but he says the project was a greater financial commitment than his company initially thought.

“While it’s a wonderful and gorgeous building, it’s also fairly inefficient for modern uses,” Greenberg said. “To make that transformation, it was going to be a larger and more complicated project than I think either the city or us realized.”

It’s been two years since then-Mayor Greg Ballard unveiled the idea to turn the 107-year-old building into a boutique hotel, a restaurant and an art museum.

Today, the only sounds of construction come from the other downtown developments near Alabama and Ohio Streets.

Mayor Joe Hogsett’s Chief of Staff, Thomas Cook, said the city is putting the property back up for bids with hopes to announce a new partner by the end of this year. The bid could be for a hotel project or something entirely different.

“If another great idea comes along that makes more sense for taxpayers and for that neighborhood, we’re obviously going to be excited about whatever that idea is,” Cook said.

Cook said he’s hoping 21c will reconsider, but Greenberg said the company has no plans to submit another request for proposal on the site.

“The bar has been raised pretty high now,” Osili said. “A few years ago, there wasn’t anything here. What we see right now and what we hear, the bustling and the construction in the background, is in anticipation of more vibrancy.”

City leaders said when they do find a developer, they’re open to providing incentives and partnering with the developer. The details would be worked out at a later date, according to Cook.