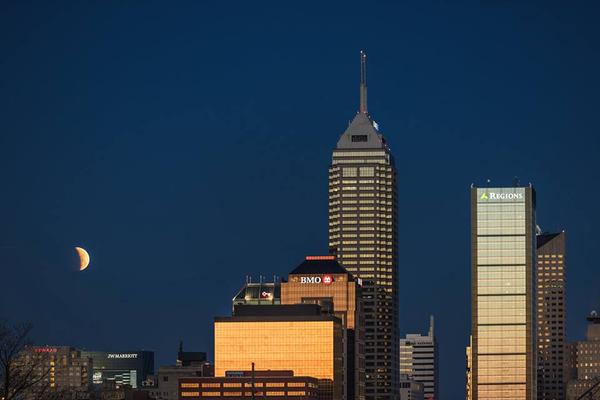 If you consider a decent view of the eclipse being able to see the totally eclipsed moon while it’s still above the horizon, points such as Denver and west will have the best chance, according to Jim Lattis, Director of UW Space Place at the University of Wisconsin-Madison.

But Indiana residents could have caught the eclipse just after 7 a.m., and only for less than five minutes.

People weren’t able to see the whole eclipse, but according to Lattis, they’ll see all the best parts. West of Denver, people saw more, and people east of Denver saw less.

“Out in the Pacific, they get to see the whole thing with the moon high in the night sky,” explained Lattis.

Lattis said there are generally two lunar eclipses each year. On average, we see half of them from any given location. Total eclipses like Saturday morning’s generally come around every couple of years.

It’s hard to estimate exactly the timing of how long an eclipse will last. It’s common for lunar eclipses to last more than an hour, as one in September 28 is scheduled to do. But, this one lasted only a few minutes.

For those in the right spot, the lunar eclipse was seen with the naked eye. And, it was completely safe to do so, unlike a solar eclipse – which requires special glasses.