Die or break the law: man illegally healed with medical marijuana identifies himself 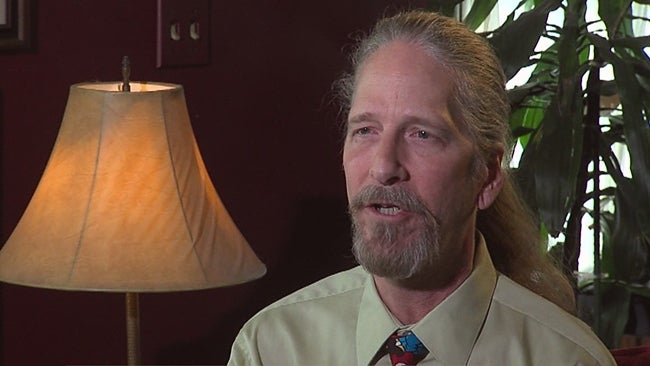 CAMP HILL, Pa. (WHTM) – A Camp Hill man says he had a choice: die or break the law. He decided to risk arrest by illegally using medical marijuana. He shared his story with WHTM three months ago. It went viral and was shared over 10,000 times on Facebook.

WHTM hid his identity to protect him and his family. Now, they are coming out of the shadows with an update on his health and a message for lawmakers.

Randal Ray Robertson, 56, was diagnosed with a rare bile duct cancer last year. After having a Whipple procedure, the cancer spread to his lungs and liver. He was given 9-11 months to live. For the past five months, he has been using a combination of chemotherapy and medical marijuana. He invited WHTM to his most recent CAT scan.

What would the new scan show? Did the cancer return?

A few days later, the results were in. Robertson’s doctor allowed the family to record the results. In the video, the doctor tells the family: “the CAT scan looks great. There are no nodules in the lungs. Now, there are just a couple subcentimeter lesions on the liver. The rest of the liver looks great.”

His lungs were still clear and the small tumors that had remained in his liver had resolved even more.

“There was no denying at that point that this was not normal and this was not just the chemotherapy,” Robertson said.

“We could have gone to jail when we were actually using it. I mean, we were in jeopardy, but we had such amazing results that we had to step out,” his wife Molly Robertson said.

Randal used a medical marijuana oil that was made in his kitchen. He would also vaporize the medicine to get it into his lungs.

“I am convinced I wouldn’t be here without it,” Robertson said. “The chemotherapy was extremely difficult to get through and the cannabis really made that a lot more tolerable for me.”

The National Cancer Institute is a federal government agency. On its website it lists cannabis, or marijuana, as a Schedule I drug with no “currently accepted medical use.” The website cites animal studies where cannabis has been shown to slow or stop tumor growth, make chemotherapy more effective, and increase cancer cell death without harming normal cells.

“I cannot figure out why on one hand our government would say look at all the uses cannabis has and on another hand say it is a Schedule I drug with no medical value,” Molly Robertson said. “That is wrong. It needs to be changed.”

Which is why this family is sharing their story. Robertson’s daughters posted a video on Facebook asking Vice President Joe Biden for help removing marijuana from its Schedule I status.

“I don’t want someone to lose their dad, or their child, or a family member, or loved because almost having that happen to me is a pain that I would never wish on somebody else,” Becca Robertson, Randal’s daughter, said.

They are sharing their story at the Capitol, as well. Robertson has spoken at several rallies and he and his family are urging lawmakers to vote on Senate Bill 3 which would legalize medical marijuana in Pennsylvania.

Pennsylvania physicians still appear to be torn on the issue. While many support compassionate use of medical cannabis, many believe there needs to be more research.