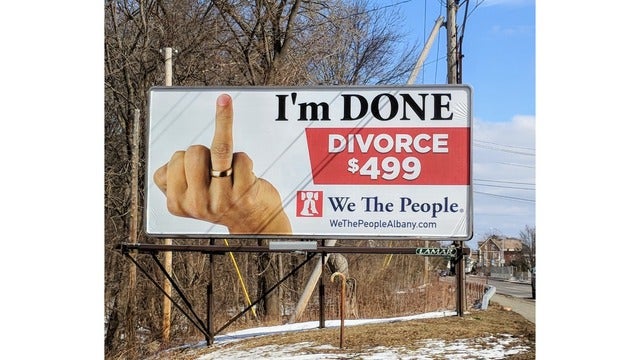 At first glance, drivers might think it is delivering a nasty message. But, it’s not “the finger” they’re thinking of. It’s actually a ring finger in an ad for We The People offering help with divorce for the low cost of $499.

Full disclosure alert, We The People is one of the many WTEN’s advertisers. However, the news crew found out about the billboard from a viewer. His email said he believed the billboard was disrespectful and made light of something that can tear families apart.

“At first we were a little concerned about how provocative it was,” said Rose Szymborski, manager at the We The People Wolf Road office. “Some people weren’t too keen on the idea, but once they realized that it was not the actual middle finger, they realized what the actual message was.”

She said the company’s interest in more provocative billboards began with one placed near the Saratoga Race Course during the 2018 summer season. That one read: “Didn’t pick a winner?”

“It definitely worked,” Szymborski said. “We had a lot of feedback. Positive feedback. And like I said, we keep it lighthearted because it’s a major event in people’s lives. It’s not always the best time in their lives.”