Does this art offend you? Why the mayor is asking to cover it up 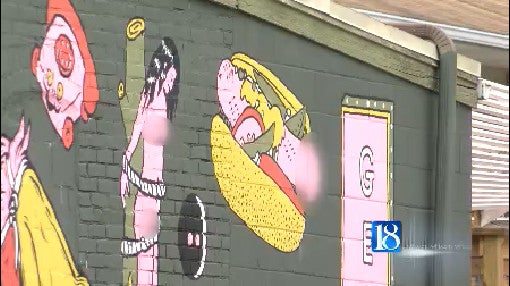 LAFAYETTE, Ind. (WLFI) – Some people living near The Spot Tavern in Lafayette are offended by a mural that was recently painted on the side of the bar.

The art shows a naked woman tied to a tree and a male part inside of a hot dog bun.

Nearby neighbor Ila Solomon started a petition online intended for Mayor Tony Roswarski. You may remember Ila Solomon for pleading guilty to trying to feed her husband to the birds. Now, she’s on a mission to clean up Lafayette’s image by petitioning to get the Spot Tavern’s mural out of sight of children.

“I definitely don’t think it says we are a caring town towards our children,” said Solomon.

“I personally would not like to see that on the side of the building that close to where we have kids walking by and things like that,” admitted Roswarski. “I’m not sure what value that really brings to the building or to the neighborhoods down there.”

But Spot Tavern’s manager Kelly DeRolf said she doesn’t know why this art would offend children.

“If it really is coming down to the children,” said DeRolf. “Then it’s kind of unhealthy to create this environment where we are censoring genitalia that’s not even being used in a sexual degree.”

Solomon argues the art is alluding to sex.

“There’s a female that’s tied to deadwood, which of course is a bondage type of sexual act,” explained Solomon.

Mayor Roswarski had his legal team look into it, and they say it does not meet the standards to be categorized as obscene.

“It’s kind of a tricky balancing act with first amendment rights and what people consider art,” explained Roswarski. “So, we have to be careful about that, I know that we’ve had a city representative talk to the building owner.”

Roswarski said Paul Baldwin owns The Spot as well as the Black Sparrow in town and is a respected man in the community. The city hopes they can come to a compromise with the bar.

“I’m sure Paul Baldwin could come up with something so children didn’t have to view the art,” said Solomon.

DeRolf said they’ll consider a compromise, depending on what it may be. The bar paid Indianapolis-based artists known as “The Droops” to paint the mural a couple of months ago.

Month of May / 1 second ago