Dog with no nose taken in by Florida animal rescue 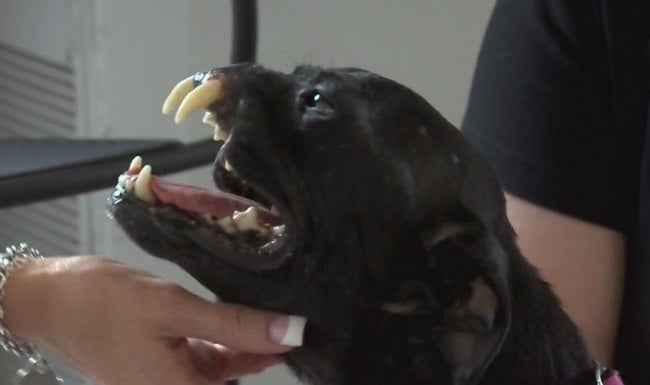 ST. PETERSBURG, FL (WFLA) – A 2-year-old pit bull mix with no nasal cavity is undergoing treatment thanks to a St. Petersburg rescue organization, Passion 4 Pits, after being found abandoned.

Despite the trauma it’s believed that Khalessi endured, she is in good spirits, the organization says.

Khalessi weighs only 20 pounds. In addition to having no nasal cavity, she’s also missing part of her upper jaw due to a past trauma, according to Passion 4 Pits.

She has old fractures to her pelvis and limited use of her rear legs.

A crowdfunding page has been set up to help raise money for several surgeries, dental work due to exposed roots and physical therapy that she will need.

The YouCaring page has already raised more than $42,000 thanks to Khalessi’s story receiving national attention.

Passion 4 Pits says Khalessi was found dumped in a yard on August 8. Orange County Animal Services called Passion 4 Pits, which took her in.

For now, she will be staying with the founder of the organization or at another foster home while she undergoes treatment at a vet hospital. She’s not up for adoption at this time.

The vet believes that Khalessi’s injuries were caused intentionally, and not a birth defect.

The rescue says that Khalessi is uncomfortable, but is not in pain, so it’s worth it for her to undergo treatment.