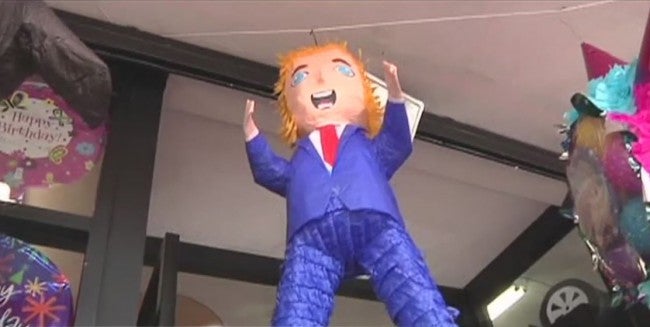 SAN FRANCISCO (KRON) – Donald Trump is taking a bashing as very popular piñata that is for sale in California.

Move over Anna and Elsa, someone is more popular these days when it comes to party favors, more specifically piñatas. One piñata is of Donald Trump, the Republican presidential candidate. And it is one hot commodity.

The Donald is actually a success story and not really in the way he may want it to be.

So far, the owner said he has sold more in a month, roughly around 100, and that is 50 percent more.

Trump has come under attack for comments he has made about Hispanics and that seems to be a big reason why he, or rather his likeness in the form of a object, is such a hit, especially in the Mission with its large Hispanic population.

By noon on Friday, Discount City had nearly sold out of the papier-mâché creations.

By the way, the big piñata was going for $20 and the small for $14. The owner had heard that some people were actually selling them on eBay for a profit.

Mohammad said despite disliking Trump, he does like the sales.

He plans to go get more Friday night to stock for the weekend.