Dozens participate in ‘Ride of Silence’ to remember bicyclists killed 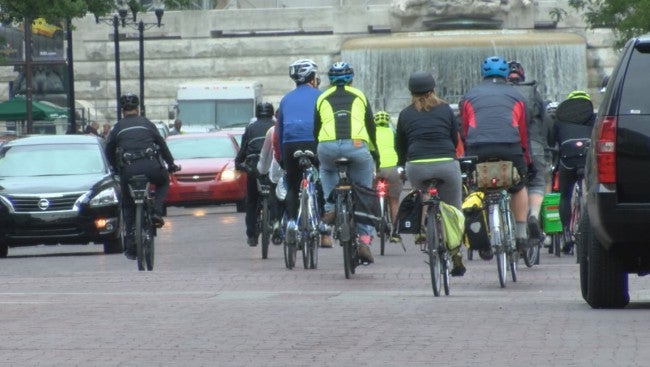 INDIANAPOLIS (WISH) — Local groups are hoping to raise awareness about safety during bike month while remembering those killed while sharing the road.

A group of people gathered outside of the Indy Bike Hub YMCA Wednesday evening preparing for the Ride of Silence.

The silent bike ride happens every year across the country and originally started in Texas after a man was hit and killed while riding his bike.

“Unfortunately I know too many,” said Nancy Tibbett, executive director of Bicycle Indiana. “I’ve gone to too many funerals.”

Nancy Tibbett is the executive director of Bicycle Indiana.

Her group has been promoting bicycling safety, educating and advocating for bicyclists.

“You would think that everyone should be able to ride their bikes and return to their destinations and home safely without injury,” said Tibbett. “This ride helps to bring attention to the fact that it isn’t necessarily that way.”

Bicyclists were asked to go no faster than 12 miles per hour and to wear protective gear during the Ride of Silence.

Those participating pedaled across downtown Indianapolis for about 10 miles without saying a word.

The ride is a personal one for Carole Terry. The president of Central Indiana Bicycling Association was hit by a car several years ago and was left with a broken shoulder for eight weeks.

“I was coming towards her and she was going the opposite direction and was making a turn right in front of me, didn’t see any cars coming, wasn’t looking for a bicyclist,” said Terry. “Suddenly I was a hood ornament.”

According to bicycle advocates several people were killed last year while riding their bicycles, including Neil Kelty.

Kelty was killed when he was hit by a school bus.

Advocates are hoping that this can serve as a reminder for motorists and cyclists to take extra precaution while sharing the road.

“We do understand that cohabiting with traffic, we all have to be very aware, but feel it is an attainable goal,” said Tibbett.

24-Hour News 8 reported on several incidents so far this year involving bicyclists and cars. The most recent happened on the east side at North Emerson Avenue and East 34th Street. The man on the bicycle was sent to the hospital in critical condition.

Click here or here for information on future bicycling events or safety tips.