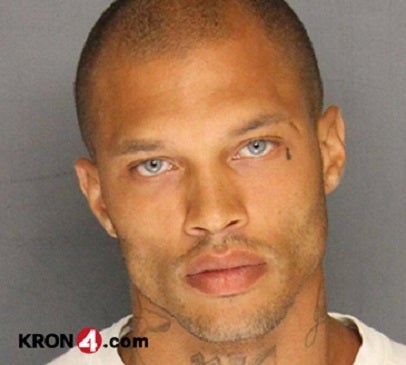 STOCKTON (KRON) – Remember Dreamy McMug Shot, the convicted felon who became an internet sensation after his mugshot went viral? The stubbly tattooed bad boy with a steamy gaze is out of prison now and is looking at taking over Hollywood, his agent hinted.

New York Daily News reported that the 32-year-old father of three from Stockton was released from Mendota Federal Correctional Institution. He was in talks with modeling agencies while behind bars, even landing a job with Blaze Model & Talent Management of Santa Monica.

“I want to thank my family and everybody for all your love, support and prayers. I’m overwhelmed and grateful for what lies ahead. I’m ready,” Meeks said in an Instagram post on Wednesday afternoon.

His agent, Jim Jordan, of White Cross Management, told BuzzFeed the “sexy felon” will be leveraging his internet fame and chiseled features into a possible modeling career.

Meeks became an internet sensation after his mug shot was posted on the Stockton Police Department’s Facebook page with a caption saying that he had been picked up during an enforcement mission in response to a rash of shootings in the Weston Ranch area.

Meeks was was sentenced to 27 months in a California federal prison in July 2015 for being a felon in possession of a .45 caliber pistol. He was charged with felony weapon and gang related charges.

The handsome felon’s photo garnered thousands of admirers, many of whom asked to find out more about Meeks’ case.

Vanessa Vieira commented on Facebook, “If this guy broke into my house, I’d make him forget why he broke in within 30 seconds. lolololol”

“Lord have mercy omg he is fine he can kidnap me anyday lol damnnnnnnnnnn….,” said Cyannie Famouz.

KRON 4 later learned that Meeks had ties to the Bay Area. He had felony conviction and a two-year state prison sentence stemming from a 2002 conviction for grand theft from a person out of Solano County. His documented gang membership forms the basis for the gang allegations in the complaint.