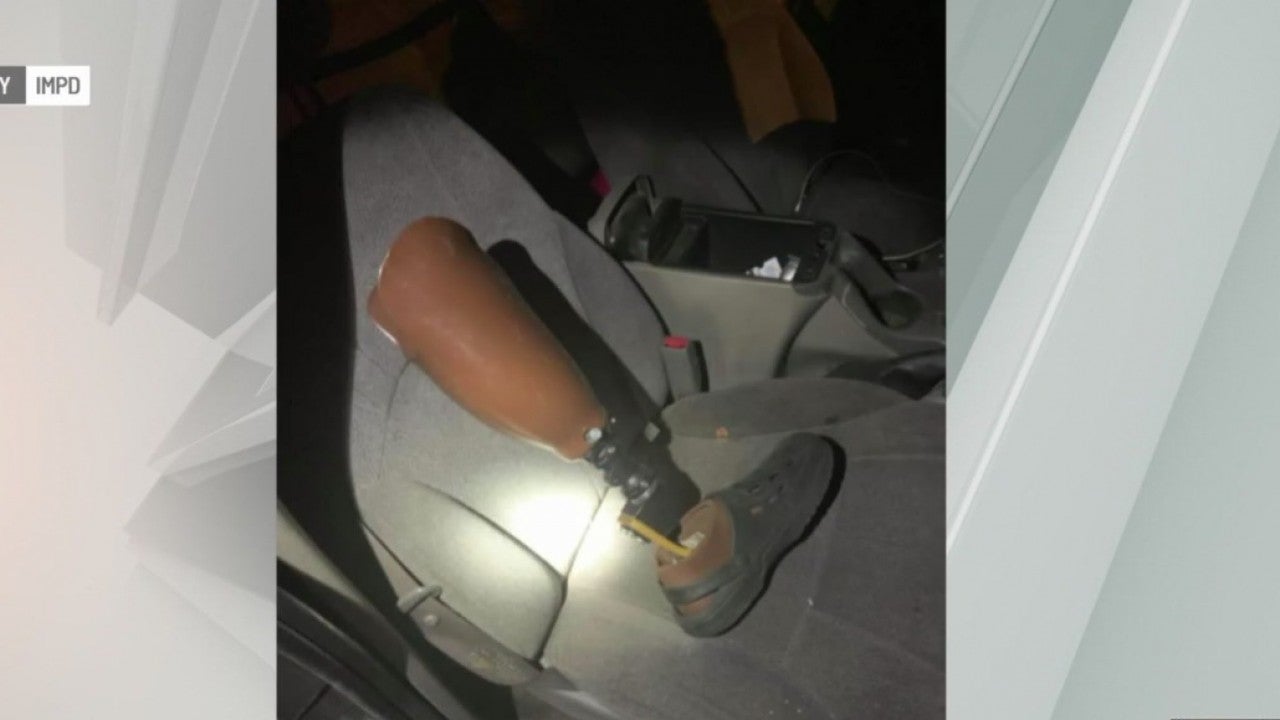 INDIANAPOLIS (WISH) — The driver of an SUV put his foot to the gas pedal and led police on a chase around 38th Street and Shadeland Avenue late Sunday night, leaving behind a stalled vehicle, a passenger and an unusual item.

The suspect almost hit a police car and refused to stop.

Indianapolis metro police east district officers posted pictures to social media minutes after the chase ended. But one of the pictures prompted more questions than answers: The driver left behind a prosthetic leg.

The picture shows no signs of trouble. A green Croc-style shoe is attached to what seems to be a prosthetic leg in near perfect condition. But who belongs to the leg? Police on Monday could not say for sure that it belonged to the driver.

Victor Rybolt lives 50 yards from the bridge, which bridge is undergoing a major reconstruction. A portion of the road going over the bridge has been removed, exposing the steel beams.

Rybolt told News 8 he heard what sounded like gunshots last night around 11 or 11:30 p.m. He and his wife didn’t think much about it until they saw someone crawling through their front yard.

“We were sitting in the front room and thought we heard gunshots, it sounded like to me, and then we heard all kinds of sirens,” said Rybolt.

The sirens they heard were from police chasing the suspect down 38th Street to the bridge. The suspect drove a SUV right through a road closed sign, up to the bridge where the driver ran out of road.

Apparently the driver didn’t see a portion of the bridge was gone.

“I thought they were up there trying to steal equipment off the bridge where they been up there working on it or something. That’s what I first thought,” said Rybolt.

Rybolt quickly changed his mind about the racket up on the bridge when he and his wife spotted someone emerging from the wooded area that separates his house from the bridge. Police say the suspect managed to get out of the disabled SUV and hotfoot it away from the crash and down the hill towards Rybolt’s house.

A passenger in the SUV told police little about the leg left in the vehicle.

“That’s why he was crawling through my yard,” he smiled and continued. “That makes sense.”

While police on Monday night still hadn’t said whose prosthetic leg they found, prosthetics typically have a serial number.

Anyone with information about this incident is encouraged to call Crime Stoppers at 317-262-TIPS.